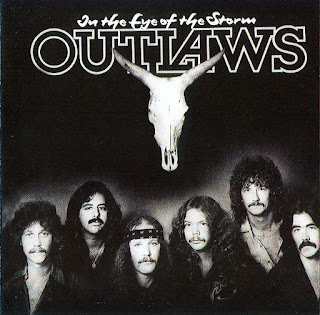 Tampa, FL-based band the Outlaws released their third album, Hurry Sundown, in 1977, and it's a fine work marked by strong songwriting and their unique country-based brand of Southern rock. All five members wrote material for Hurry Sundown: vocalist/lead guitarist Billy Jones, vocalist/guitarist Henry Paul, vocalist/lead guitarist Hughie Thomasson, new vocalist/bass guitarist Harvey Dalton Arnold, and drummer Monte Yoho. One significant influence on the album is producer Bill Szymczyk. It's obvious his work with the Eagles sharpened the Outlaws' harmony vocals on Hurry Sundown. "Gunsmoke" is a vibrant rocker with lots of guitar soloing; the Outlaws didn't feature three guitarists for nothing.
The bright country-rock chorus is the foundation of "Hearin' My Heart Talkin'." Arnold's "So Afraid" is a strangely compelling country song with two distinctly different parts: emotionally fragile lyrics supported by happy-go-lucky music driven by Thomasson's cheerful banjo playing. Thomasson's excellent "Hurry Sundown," an edgy story song with piercing guitar lines, was a minor hit single. "Cold and Lonesome" is a relaxed, swaying tune contributed by Arnold. The major discovery on Hurry Sundown is Jones' startling "Night Wines."
This mournful, haunting song features a regret-filled protagonist drinking at night while lamenting the sad inevitability of aging. "Night Wines" must be at least partly autobiographical, because Jones, an obviously tortured soul, battled alcoholism before leaving the band by 1982 and, ultimately, took his own life in 1995 at age 45. About the first half of "Man of the Hour" is slow country with twangy electric guitars and Thomasson's pedal steel guitar, but then the tempo shifts to a mid-tempo jam; along the way, guest Joe Vitale adds simple, effective synthesizer/strings fills.
by Bret Adams
"In The Eye Of The Storm" kicks off with the rollicking 'Lights Are On (But Nobody's Home)' which combines a driving rock feel with the bands trademark harmony work. Salem would chip in with 'Long Gone', a driving rocker he would revisit on his first solo effort 'Cat Dance'.
'It's All Right' shows the band deliver one of their catchiest efforts yet with some soaring vocals from Hughie Thomasson while the album's left turn comes in the form of a cover of Elvis Costello's 'Miracle Man'. While not an obvious choice on paper, The Outlaws guitar-heavy take works brilliantly and proves to be an inspired choice.
'Comin' Home' has a real swing about it while the brooding 'Blueswater' is another real standout. '(Come On) Dance With Me' waves the southern rock flag high and 'Too Long Without Her' tips it's hat to the earlier Outlaws sound, with Thomasson channeling the vibe found on the first three albums. Also of real importance is the phenomenal 'I'll Be Leaving Soon' which rocks hard and boasts a great guitar solo.
'In The Eye Of The Storm' is one of the most underrated efforts by The Outlaws in my book and it's presence here is worthy of the reissue price alone. However, the first half of the disc is made up of not the 1980 follow up 'Ghost Riders In The Sky' (which was reissued alongside 'Playin' To Win') but 1982's 'Los Hombres Malo'. It's fair to say The Outlaws were running out of steam at this point. Billy Jones had departed and, unlike Henry Paul, was not replaced, with Salem and Thomasson deciding their guitars and lead vocalists were enough. They did bring in keyboard player Gary Lyons however, and the album starts off well enough. Salem's hard hitting 'Don't Stop' sets the bar high, and the brilliant 'Foxtail Lily' benefits greatly on the infectious chorus from some female backing vocals, which help bolster the diminished harmony sound that was such a distinctive part of the band.
by James Gaden 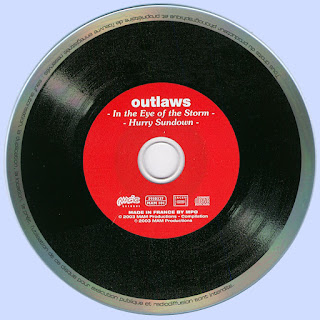