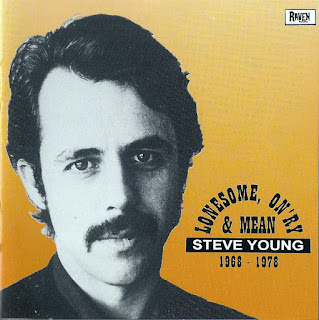 Steve Young was born on 12th July 1942 in Newnan, Georgia. Genetically a mix of Native American [Cherokee on his father side] and European stock, Young was raised in the fundamentalist Baptist church but in later life openly embraced Zen Buddhism. In search of employment his parents moved around the southern states as Steve was growing up, and they lived variously in Georgia, Alabama and Texas. By the time Young graduated from high school in Beaumont, Texas he was already composing songs. Those songs were a marriage of folk, country, gospel and blues influences. Following graduation from high school, Young returned to Alabama where he quickly established a name for himself in local venues. During the early 1960’s he also spent time in Greenwich Village, arriving pretty much concurrently with the kid from Hibbing, Minnesota. Returning briefly to Alabama, Steve subsequently settled in California where he was a mailman as well as working with the then ‘unknowns’ Stephen Stills and Van Dyke Parks in the band The Gas Company. Although they received offers to make a recording, they rejected them all. Young went on to join the folk/country band Stone Country, and their only self-titled album on RCA Victor Records surfaced in 1968.

When Stone Country broke up, Young once again began working as a solo act and signed his first solo recording deal with Alpert and Moss’ A&M Records. The session players on this Tommy Li Puma produced label debut “Rock, Salt & Nails” – which took its name from a Utah Phillips’ song - included Gene Clark, Chris Hillman, Bernie Leadon and Gram Parsons. The album was reissued in the U.K. by Demon Records during 1986. “Seven Bridges Road” [1971] was initially released by Reprise Records, and resurfaced two years later on the Blue Canyon label, and in 1981 on Rounder Records. While the foregoing versions all featured ten tracks, albeit that the latter reissue included a new recording of the opening, album title song, there have been a number of enhanced versions released in recent decades. In 1991 the German Big Ear imprint issued a fifteen track version housed in a galvanised steel box, while the Korean Beatball imprint issued a twenty-one track version during 2005. Young’s most covered song is “Seven Bridges Road,” with versions cut by Joan Baez, Rita Coolidge, Iain Matthews, Ricochet, Dolly Parton and more. The Eagles enjoyed a chart hit with a live version of the song during 1980.

The late Waylon Jennings cut Young’s “Lonesome, On’ry And Mean” and the song furnished the title of the Texan’s 1973 RCA Victor album which he co-produced with Ronny Light. “Honky Tonk Man” first appeared on Mountain Railroad Records and was reissued during 1984 by Rounder Records, while a CD version surfaced on the Drive label during 1995. During 1975 Steve appeared in the James Szalapski directed ‘new country’ music documentary “Heartworn Highways.” Young returned to the RCA Victor label during the mid nineteen seventies and cut the albums “Renegade Picker” and “No Place To Fall.” The latter albums were reissued as a 2CD set during 2000. As I noted earlier Rounder Records reissued “Seven Bridges Road” during 1981 and the same year the label released a new Steve Young recording “To Satisfy You.” To date “Look Homeward Angel” has only appeared on the Swedish label Mill Records as a vinyl edition, while the eight-song synth heavy collection “Long Time Rider” was initially released on cassette by the Nashville imprint Golden Chain, and three years later on CD by the German Voodoo label. The album was reissued once again, initially, as a 500 copy, numbered limited edition CD by the Melbourne, Australia label Afterburn Records during the Fall of 2008.

During the years Steve lived in Austin, he cut two albums for the now defunct local imprint, Watermelon Records. They were respectively titled “Solo/Live” – recorded live at Anderson Fair Retail Restaurant in Houston, Texas - and the Steven Soles produced studio collection “Switchblades Of Love.” Following a half decade long silence, in the States, Appleseed Recordings issued “Primal Young.” A mix of new Young compositions and cover songs, the album was produced by J.C. Crowley. Featuring new recordings of previously released material “Songlines Revisited – Vol. 1” was released by Starry Pyramid Records, while the six song “Australian Tour EP 2007” - a compilation of live cuts and previously released studio tracks - is self-explanatory by its title. Also a Starry Pyramid Records release “Stories Round The Horseshoe Bend” featured a November 2006 live performance by Steve at the Pioneer Pavilion in Youngstown, Ohio.

During his career Steve has variously lived in acknowledged music towns like Nashville and Austin, although he currently makes his home in California. Similarly he has toured the world, with concert appearances in Europe, Australia, New Zealand, China, Mongolia, Egypt, East Africa and more. Jubal Lee Young, Steve’s son is also singer/songwriter, and to date has released two albums “Not Another Beautiful Day” [2006] and “Jubal Lee Young” [2007] both produced by Thomm Jutz, who co-produced “Songlines Revisited – Vol. 1.”
by Arthur Wood 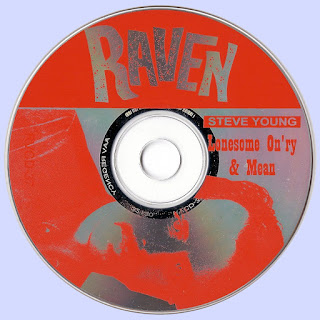 Free Text
Text Host
Posted by Marios at 4:17 AM 1 comment: