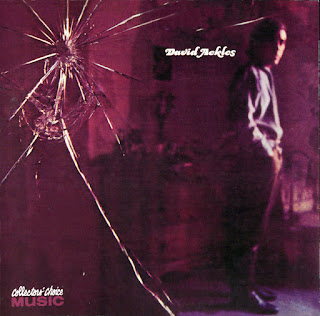 Along with Randy Newman, Van Dyke Parks, Harry Nilsson, and some others, David Ackles helped widen the definition of contemporary singer-songwriters in the late 1960s. This was a group of performers open to incorporation of many non-rock pop and theatrical influences into their work, and not based in folk-rock, like so many of the other early singer-songwriters were. Nor were they conventional rock or pop singers. Somehow, nonetheless, they recorded albums that were marketed to the rock audience. Of all the names mentioned above, David Ackles is certainly the most obscure, even if his quartet of albums won him a cult audience that included Elton John and Elvis Costello.

David Ackles, his self-titled 1968 Elektra debut, was an unusual effort even by the label's own high standards for introducing original talents. Ackles's dark, brooding songs and low croon-rumble of a voice delivered cerebral lyrics painting the everyday adventures of misfits and their struggles to find meaning and spirituality. What could have been overblown in other hands was given a stately dignity by the stoicism, vacillating between determination and resignation, of Ackles's vocals and observations. Far more than any of his subsequent albums, the record's arrangements were tailored for rock ears, with ethereal psychedelic-tinged guitar and organ that weren't too unlike those heard on other Elektra LPs of the time, such as Tim Buckley's early releases.

Ackles's path to a record deal was about as strange as it could be for a late-1960s underground rock artist. Unlike virtually every other such performer of the era, David had virtually nothing in the way of either a folk or rock resume, or even professional experience as a solo live performer. Already in his early thirties, his principal background was in musical theater. He had met David Anderle in the theater department of the University of Southern California, where the two Davids had gone to school together. Years later, Anderle was working at Elektra Records' west coast office, and Ackles did some demos for his old friend.

It's still unclear whether the original intention was for Ackles to write songs for others, or to record him as a solo artist from the start. Before his death in 1999, Ackles told author Mark Brend (in the book American Troubadours), "My intention was to have lots of other, much better singers record my songs...I believe the truth is that [Elektra president] Jac Holzman couldn't interest any other singers on his label in recording my stuff, so was forced into offering that chance to me." To the recollection of Ackles's widow, Janice Vogel Ackles, "David Anderle called him and said he wanted David to write some songs 'cause he remembered how talented he was, or something to that effect. I think David Ackles's understanding initially was that they were interested in him as a songwriter, and then when he did some demos, everybody said, 'Well, I don't know who else is gonna sing this material. I think it's really your stuff, and you should do it.' I remember David Ackles telling me that once he submitted the material, he didn't think he was going to record it. He thought that they were going to farm it out to other people, so it came as a big surprise to him."

When Ackles first played his songs for Elektra, "I probably had some trepidation, 'cause David was very much involved in musical comedy music, which I hated," Anderle admits. "Then 'Road to Cairo,' 'Down River,' and these things just knocked me out. I realized he was writing those kind of songs, instead of the little musical comedy things he was writing in college. When David played the songs, I believe Russ Miller and I took him into the studio and cut some demos with him. Russ was running Jac's publishing company at the time. We played the demos for Jac, and Jac certainly gave the okay to proceed [with the album]." Anderle, not even a producer at the time (though he'd go on to produce many albums over the next couple of decades, including Judy Collins's Who Knows Where the Time Goes), and Miller would be co-producers for David Ackles.

The album's backing was supplied by musicians who had been in the Electric Flag and Iron Butterfly; guitarist Doug Hastings had been in the Daily Flash and, briefly, Buffalo Springfield. (Most of them would go on to play in the late-1960s Elektra rock band Rhinoceros.) "I remember what a bitch it was making that first album," says Anderle. "We used him and his piano as a bed, and added instruments afterwards. I'm not even sure if he cut anything with a band. We might have cut some of the things with the boys playing, but I remember working really hard matching stuff up after the fact. It was a lot of overdubbing, making stuff fit in, and it gave it a really interesting feel. It didn't sound like anything else." Though Ackles had never recorded with rock musicians or even done any solo live shows, Anderle maintains the singer-songwriter was comfortable being the showcased solo recording artist: "He was very adaptable and so full of music anyway. He went into it like a fish in water."

Standout tracks included "Sonny Come Home," which was something like the film The Swimmer set to music in its disconsolate tale of a disastrous attempt to go home again; "Down River," in which Ackles sounded just a bit like a counterpart to fellow grim balladeer Scott Walker; and the six-minute "His Name Is Andrew," with its quasi-religious tone and elegiac organ. Certainly the most popular tune, inasmuch as any David Ackles song could be said to be popular, was the first-person drifter narrative "The Road to Cairo," covered in Britain by Julie Driscoll, Brian Auger, & the Trinity (as their non-charting follow-up to their UK Top Five cover of Bob Dylan's "This Wheel's on Fire").

Anderle "never could understand why that wasn't a hit," and Ackles even put a French-language version on a B-side of a 1968 UK Elektra single. According to Anderle, "Somebody thought that David would have a shot in France, because of the nature of Charles Aznavour and the French ballad singers. Jacques Brel, I think, was the person that was mentioned. I think Elektra figured he would have a shot internationally, so he did the French version of the song." It didn't catch on in Europe, and David Ackles wasn't a hit anywhere, though like all his albums it was a success with critics. The pattern continued on his second album, Subway to the Country, in which he began to shift from rock to the more theatrical and orchestral foundations of his artistic vision.
by Richie Unterberger 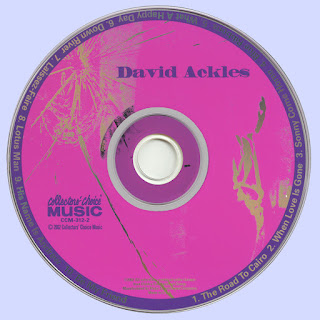 Free Text
Text Host
Posted by Marios at 7:22 AM 3 comments: