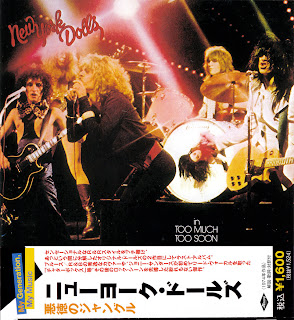 After the clatter of their first album failed to bring them a wide audience, the New York Dolls hired producer Shadow Morton to work on the follow-up, Too Much Too Soon. The differences are apparent right from the start of the ferocious opener, "Babylon." Not only are the guitars cleaner, but the mix is dominated by waves of studio sound effects and female backing vocals.

Ironically, instead of making the Dolls sound safer, all the added frills emphasize their gleeful sleaziness and reckless sound. the Dolls sound on the verge of falling apart throughout the album, as Johnny Thunders and Syl Sylvain relentlessly trade buzz-saw riffs while David Johansen sings, shouts, and sashays on top of the racket. Band originals -- including the bluesy raver "It's Too Late," the noisy girl-group pop of "Puss N' Boots," and the Thunders showcase "Chatterbox" -- are rounded out by obscure R&B and rock & roll covers tailor-made for the group. Johansen vamps throughout Leiber & Stoller's "Bad Detective," Archie Bell's "(There's Gonna Be A) Showdown," the Cadets "Stranded in the Jungle," and Sonny Boy Williamson's "Don't Start Me Talkin'," yet it's with grit and affection -- he really means it, man!

The whole record collapses with the scathing "Human Being," on which a bunch of cross-dressing misfits defiantly declare that it's OK that they want too many things, 'cause they're human beings, just like you and me. Three years later, the Sex Pistols failed to come up with anything as musically visceral and dangerous. Perhaps that's why the Dolls never found their audience in the early '70s: Not only were they punk rock before punk rock was cool, but they remained weirder and more idiosyncratic than any of the bands that followed. And they rocked harder, too.
by Stephen Thomas Erlewine 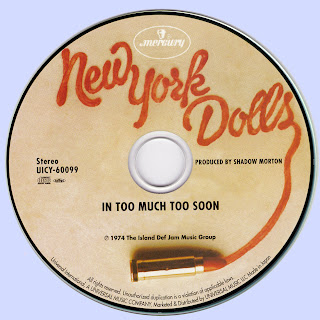