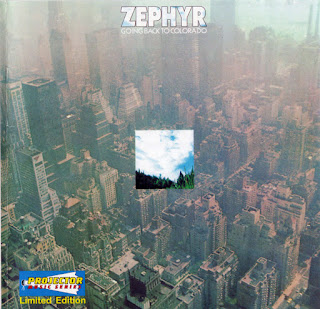 David Givens met Candy Ramey in Aspen, Colorado in the fall of 1967 while Candy was performing with a local jug band. Impressed by Candy’s performing abilities and charisma, David got a band together to play jobs in Aspen, and they quickly began rehearsing material with Candy while she was still in the jug band. Their paths crossed once with Tommy Bolin during a jam set up by a mutual friend, but they didn’t hook up with Tommy for real until later.

David and Candy married in 1968, then moved to Boulder and started working in a band called Brown Sugar. Tommy and John Faris arrived in the fall of 1968 with their band Ethereal Zephyr, which they had formed after Tommy’s return from a short stint away from Denver to Cincinnati. Tommy’s influences at the time were Elvis, Jimi Hendrix, the Beatles, and a wide range of older rock and blues. He was very fond of Wes Montgomery’s guitar work, having worked on playing octave runs as far back as A Patch of Blue. Faris was well versed in music theory, and introduced Tommy to jazz greats such as John Coltrane. Also during this period Tommy was learning more about blues playing from Denver musician Otis Taylor, whose modern take on the blues and beyond is currently enjoying a high degree of respect in critical circles.

According to David Givens, Tommy jammed with Brown Sugar at a one of their regular Wednesday night gigs in Boulder at the Buff Room, and the results were so inspiring that within a few weeks they played again with Tommy, John Faris and an unidentified drummer. They then decided to break up their current bands and reform with a new drummer. Otis Taylor recommended Robbie Chamberlin, and a jam at the Folklore Center in Denver resulted with Chamberlin welcomed to the drum chair. With the firm lineup intact, they dropped the "Ethereal" from the name of Tommy and John’s band and became Zephyr.

In September, 1970 the band went into Electric Lady Studios in New York City to start recording their second album with famous engineer/producer Eddie Kramer at the helm. They were now signed with Warner Brothers, as Probe had folded. Kramer had worked with some of the top names in rock, such as Led Zeppelin and especially Jimi Hendrix, with whom Kramer had an extremely productive relationship. The sessions for the second album, Going Back to Colorado, were marred by Kramer’s distraction due emotional fallout following the death of Hendrix as well as a climactic romance with Carly Simon. The sessions for the album wrapped in October, and the album was released in January, 1971.

Going Back to Colorado was in many ways an improvement over Zephyr, in large part due to better presentation of Candy’s vocals, but it still wasn’t the commercial breakthrough that the band was hoping for. Both are extremely valuable and engaging documents, however, to fans of Tommy and of musical power and adventure. Going Back to Colorado is more song-oriented and polished, while Zephyr offers more raw exposure to Tommy’s guitar work.

Whatever difficulties Tommy faced during the recording of the album were mitigated by the important contacts he was making with important fusion musicians such as Jeremy Steig and Jan Hammer, who would soon play major roles in Tommy’s successful move into fusion.
by John Herdt 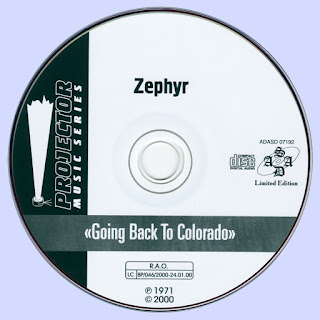 Free Text
the Free Text
Posted by Marios at 4:00 AM 1 comment: