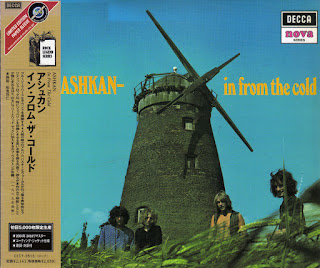 We're shallow enough to admit the weird cover is what initially attracted our attention to this obscure LP ... there was just something odd about seeing four "hip" looking guys standing in a wheat field in front of an ancient windmill.

First off, we'll tell you numerous critics have slagged the album as being ordinary and unimaginative. We'll take issue with them and tell you it's actually an overlooked minor classic. Featuring the talents of singer Steve Bailey, bassist Ron Bending, drummer Terry Sims and guitarist Bob Weston, Ashkan made their recording debut with 1969's "In from the Cold"

In the UK the set was the first released by Decca's newly established progressive-oriented Neon label. In the States it saw a release on London's Sire subsidiary. Co-produced by Peter Sherter and Ian Sippin, to our ears much of the album bares an uncanny resemblance to early Spooky Tooth. Propelled by Bailey's hoarse growl and the band's penchant for screaming guitars, the comparison was reinforced on tracks such as "Going Home", "Take These Chains" and "Out of Us Two".

Elsewhere Bailey's growl sounded like Joe Cocker on "Practically Never Happens", while Bob Weston's "Slightly Country" sounded like it was stolen from the early Steve Winwood and Traffic catalog. With the exception of the pedestrian blues number "Backlash Blues" the entire album including the extended "Darkness" was worth hearing.

Weston became somewhat of a musical journeyman, briefly reappearing as a member of Savoy Brown, followed by a brief stint in Fleetwood Mac where he was fired after the rest of the band discovered he was having an affair with Mick Fleetwood's wife.  In the late-'70s he did a tour of duty with Howard Werth and the Moonbeams (see separate entries).
Bad-Cat 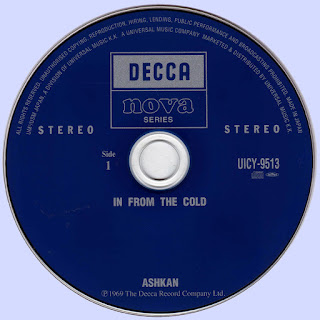