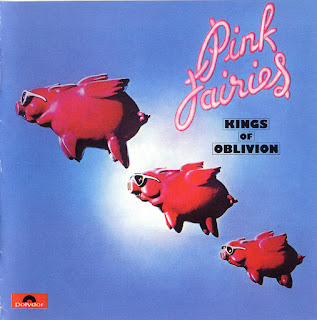 This was The Pink Fairies’ last stand right before the rot of inactivity from lack of funds set in and cancelled their Polydor contract. An album of soaring Marshall Superfuzz anthems and Ladbroke Grooves, this was their last album while they were still (for a short time, anyway) a cohesive unit. The undertow of Paul Rudolph leaving in 1972, the sacking Mick Wayne after one shite single and a tour cancelled after a few gigs left The Fairies down to just the rhythm section of drummer Russell Hunter and bassist Sandy Sanderson. Their old friend Mick Farren suggested a replacement guitarist he knew from years earlier who had performed at the Phun City festival he had organised.

The guitarist was none other than Larry Wallis, who had moved onto later-period Blodwyn Pig and then UFO before Farren’s suggestion. Lazza Wallis: a true Pink Fairy if there ever was one! He brought not only his cranked Stratocaster riffing and a good sense of structured songwriting to hang his flowing reckless guitar style upon, but a gleeful sense of humour and overall wiseacre rock and roll sensibility. “City Kids” (co-written by Wallis and Sanderson) is a street punk anthem of raving, speeding, hanging out and when Wallis sings the line “Park the car/And ruuuuuun” it’s about as “Under My Wheels”-era Alice Cooper as it gets. “I Wish I Was A Girl” begins another musical fray with soaring intro guitar and Russell Hunter spraying all his cymbals like a Merseybeat Ringo on methedrine and if that’s Sanderson on bass it was his most pronounced playing ever on record.

An elongated bridge in the middle continues as Wallis’ guitars have now four-folded into an overdubbed, pile driving ecstasy, yet it’s beyond mere boogie as the momentum keeps plateau-ing up and up. Lazza’s guitar is not only melody but rhythm as well, as Hunter and Sanderson keep getting in and out of sync and overcompensate with just thrashing it out. The title gets repeated over and over as a faded mantra to the back of this rough and ready work out. “When’s The Fun Begin?” is a Notting Hill Gate doper weaving down a deserted West London street, the only light his blurred vision can see is the reflection of street lights on the wet tarmac. It’s coiled and tense yet opiate-slackened at the same time, and Hunter’s bashing over Wallis’ foot-controlled police siren solo make the bust inevitable as the vocals are shoved into the back of a police van -- the last words a panned, repeated phrase on the fadeout.

By this time the album has such a weirdly energetic and wasted atmosphere, you wonder how they can JUST keep it from falling apart. Larry Wallis’ structured songwriting and stunningly raw liquid-feel guitar playing keeps the sole surviving rhythm section busy, and the riotous instrumental, “Raceway” is where the three-man Fairies blast-out in a mid-sized hall at full volume with bright white overhead spotlights flicker on and off in an off-beat pattern catching the three longhairs in the act of proceeding to pummel their disbelieving audience. If Russell Hunter had four arms, he still wouldn’t be hitting half as many cymbals as he does here while multiple Wallis solos are bending in the air over the trio.

The coda is a flurry of high-pitched “Axe Victim” riffing, but trapped in a mandrax haze at twice the speed. “Chambermaid” and “Street Urchin” round out an album most people weren’t expecting from The Pink Fairies at this point in time: a strong, vibrant testimony to their no-bullshit rock and roll. And live it was even shatteringly LOUDER than before, which is damn near incomprehensible and frightening to even think about.
by The Seth Man 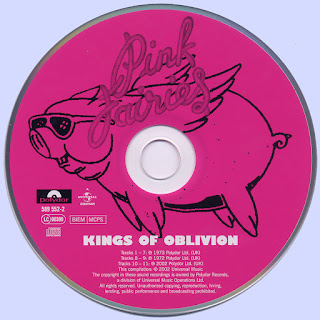 Free Text
the Free Text
Posted by Marios at 5:13 AM No comments: