The Mojo Men - Not Too Old To Start Cryin' The Lost Masters (1966 us, tight razor sharp blend of garage rock and trippier elements, 2008 remaster) 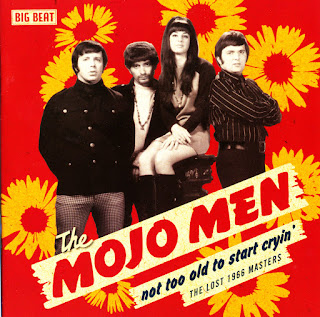 In 1966, having just left Autumn Records, the Mojo Men recorded a batch of songs for their new label Warner Brothers, intended both as potential singles and a possible long-player. The San Francisco-based band had recently recruited drummer and lead singer Jan Errico from the neighbouring Vejtables into the fold, which brought about a change of direction. Originally a raunchy rhythm and blues based combo, the Mojo Men were now transformed into an assured folk rock and baroque pop band that drew comparisons to the Beau Brummels, the Byrds and the Mamas & The Papas.

Sad to say, this album’s worth of mostly original material was eventually shoved under the rug, leaving these sessions to gather dust in the vaults, although some of the tunes would be re-recorded later. But thanks to the recent discovery of the master tapes, here’s “Not Too Old To Start Cryin’” in all its shimmering glory. While a handful of cuts, particularly the Bo Diddley-influenced shuffle beat of ‘Til I Find You’, the fuzztone-spiked ‘Give Me One More Chance’ and the rebel snarl of ‘They May Be Right’ retain the band’s initial garage punk pose, the remainder of the material on the disc emphasizes polish and precision. ‘Don’t Let It Happen To Me’, ‘Look Into My Eyes’, ‘Don’t Leave Me Crying Like Before’, ‘Happiness Is You’ and the title track of the collection – which is heard in two differing arrangements - place a strong emphasis upon the band’s new found repertoire of blissed-out harmonies and flowery melody, complemented by heaps of jangly guitars, twinkling keyboards and smart and tight arrangements.

Alive with colour and light, “Not Too Old To Start Cryin’” examines the Mojo Men at the peak of their powers, resulting in a genuine pop rock masterpiece. Despite the fact these stunning songs were shelved, the band soldiered on and it wasn’t long before fame arrived. In early 1967 they netted a nationwide Top 40 hit single with a gorgeous cover of Buffalo Springfield’s ‘Sit Down Think I Love You’ - but that’s another story altogether.
by Beverly Paterson 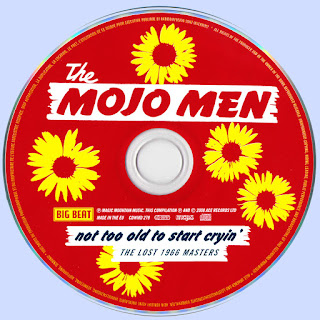 Free Text
Text Host
Posted by Marios at 9:55 AM 2 comments: