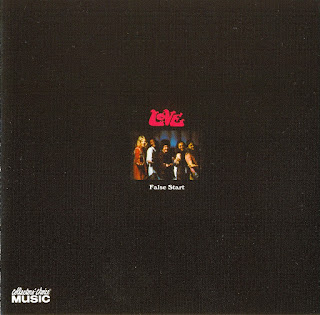 False Start is Love’s most blatantly commercial album since their 1966 self-titled debut. Less than half the length of Out Here, False ditches the psychedelic excesses for terse, cowbell-happy pub-rock. Supposedly, the album’s marquee track is “The Everlasting First”, which lacks any discernible hooks or insight but does feature some wah-wah wanking from one Jimi Hendrix, a phoned-in performance that, if uncredited, would be unidentifiable. And its lyrics are pretty puzzling: Lee begins with a love song, and ends up talking about the unjust persecutions of Jesus, Lincoln, and MLK.

As a no-frills rock album, False Start is perfectly serviceable, diverse even. But as a Love album, it falls short, due more in part to lyrical superficiality than radio-ready concessions. Lee’s more pessimistic inclinations are masked, or chemically suppressed, with a hollow, up-with-people mentality. The man who once warned of water turning to blood and shooting bluebirds now sings of riding vibrations and sunshine. “Open up your heart and let the sun come shining in”, he suggests, a far cry from the fire-and-brimstone sermons he once recited. For finger-wagging sage advice, Lee can do no better than “You’re gonna reap just what you sow / I’m here to let everybody know / If you don’t do your best, you’re gonna find yourself in an awful mess”. “Stand Out”, a lesser track from Out Here, is duplicated in a rudimentary and no more impressive live version, and jaunty goofs like the immaturely titled “Slick Dick” (where Lee even admits “I know what it sounds like but it ain’t”) and “Gimi a Little Break” (note the Hendrix-fied spelling) further trivialize the album.

The band is tight and funky, the melodies are generous, and Lee is a versatile pop singer, probably more versatile than Hendrix even. It’s just that Lee is or was capable of so much more than these simplistic exercises. The double meaning of Love (hey, it’s an emotion, and it’s also the band name) is toyed with repeatedly, as on the eleven-minute “Love is More Than Words or Better Late Than Never” and “Love is Coming”, which might as well be a Monkees-esque self-referential theme song. At the end of “Keep on Shining”, Lee repeatedly shouts the word “love”, as though it’s imprisoning him, keeping him from shining, in fact.

And perhaps that’s the lesson of these albums. Forever Changes is a work not simply of prophecy, but finality, digging the grave for ‘60s idealism before the movement even peaked. In its aftermath, both Love the band and love the concept are debunked myths and irrelevant jokes. The man who once proclaimed “the things that I must do consist of more than style" is now prizing style over substance. On Out Here and False Start, Lee has become a casualty of that which he once railed against: it’s a sad, harrowing portrait of one more artist harnessed by the shadow of his own masterpiece, and the certainty of his own convictions. In that respect, these albums represent the shortcomings of peace-love utopianism every bit as much as Lee’s more regularly heralded work.
by Charles A. Hohman, 17 Jul 2008 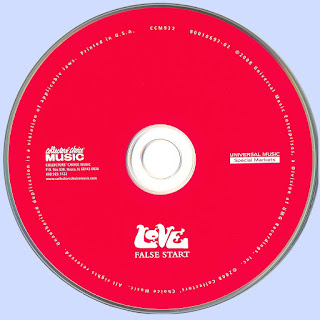 Free Text
Text Host
Posted by Marios at 8:31 AM No comments: