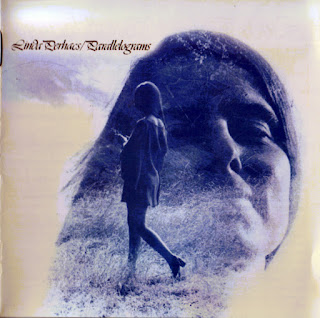 This unique and fascinating album has belatedly garnered a considerable following in recent years as a result of the new interest in what is nowadays referred to as Acid Folk. In reality it’s finely-structured acoustic folk-rock, but with strong elements of psychedelic studio treatment and twentieth-century avant-garde classical and choral music. Until now it’s only rated a couple of oblique references in these pages; now it’s time to give it the full exposure it deserves.

The album was the product of a chance conversation between Los Angeles periodontist Linda Perhacs and one of her patients, film score composer Leonard Roseman. Perhacs had written the songs as a hobby sideline, composing with just modally-tuned acoustic guitar and her own beautifully clear voice. Stimulated by Perhacs’s own graphic visualisation of her composition “Parallelograms” as “visual music sculpture” encompassing light, form and colour as well as sound, Roseman offered to develop her songs into an album, arranging and enhancing them in George Martin fashion and utilising the services of his studio’s state-of-the-art technology plus session musicians including guitarist Steve Cohn and percussionists Milt Holland and Shelley Manne. The stunning results found a release on Kapp records, but there the interest stalled; the label pressed the songs out of sequence with dull AM-friendly equalisation on poor quality vinyl, and then proffered no publicity for it, and the brashly commercial Los Angeles AM radio stations refused to play it. When what would become her first and only album in almost four decades tanked, Perhacs went back to the day job.

Over thirty years later she was alerted to the fact that the new generation of Acid Folk musicians such as Devendra Banhart were drawing inspiration from her long-lost work. Reissued by Wild Places in 1996 and by Sunbeam in 2008, the currently-available CD is correctly sequenced, beautifully remastered and comes with eight bonus demos, alternative versions and unreleased songs plus a superb booklet history by Perhacs herself. Perhaps best of all, its belated success has induced Perhacs to start creating music again and she’s issued two albums of new music in partnership with musician/producer Ben Watt of Everything But The Girl since 2007.

The quirky acoustic guitar tunings of Parallelograms may suggest early Joni Mitchell and the clear, crystalline vocals similar-period Joan Baez, but on this album Linda Perhacs utterly transcends both with her dazzling originality. The gently-rippling guitar arpeggios and cascading multi-tracked harmonies of the opening “Chimacum Rain” set out the collection’s predominant motifs, but the following “Paper Mountain Man” is surprisingly funky and blues-inflected with its jazzy percussion and distant, ethereal harmonica, and the wonderfully ironic critique of South Californian society marital celebrations, “Porcelain Baked-Over Cast-Iron Wedding”, rocks along similarly on oriental percussion and delightfully atonal 12-string.

Head and shoulders above the rest, the title track even eschews proper lyrics, the singer’s tongue playing mischievously with the syllables of the title and the names of other geometric forms in a sinuous flow of sound, broken by a Gyorgy Ligeti-like musique concrete interlude, all being the product of Roseman’s realisation of Perhacs’s original scroll-like pictorial depiction of the song. “Moons And Cattails” and “Morning Colours” are similarly, though slightly less, experimental, the former again utilising superbly melismatic vocals and the latter glorious electronically-processed flute obbligati. The rest is more conventional, but still well to the left of the field. As with the avant-garde music that largely inspired it, this is an album to be listened to, not merely heard.
by Len Liechti 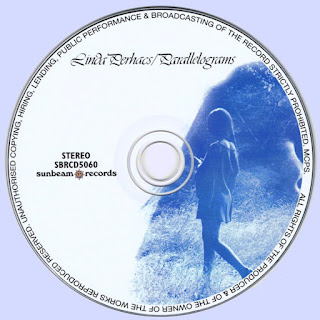