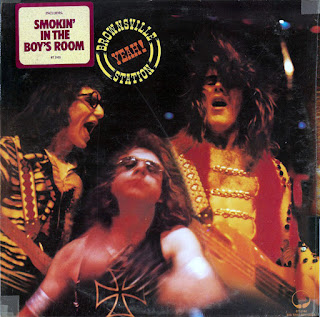 Formed in 1969 by Cub Koda, who later reaped the title as an honorable music historian, Brownsville Station issued a trio of albums prior to harvesting honey with this disc. Although such efforts received kind reviews, they failed to generate substantial sales. Despite the lack of vinyl interest, the Ann Arbor, Michigan band busted their butts touring the local circuit, where they drew a fanatical following.

Nearly every track on Yeah! could qualify as a jukebox favorite. It’s easy to hear how much fun Brownsville Station had singing and playing these punchy songs smacking of beer stains and the smell of nicotine. The band appears as if they have nary a care in the world. They eat, sleep and breathe rock and roll, and are thrilled to pieces to be sharing their passion with those willing to lend an ear.

Additional winners offered on Yeah! include the brawny bash and flash of “All Night Long” and the senselessly catchy “Let Your Yeah Be Your Yeah,” while a ripping revision of Hoyt Axton’s “Lightnin’ Bar Blues” and a spirited take of the Balloon Farm’s psychedelic scented “Question Of Temperature” should also be given special attention.

With ten great songs, Yeah! is an album that lives up to its name -- quite possibly the only fully realized LP the band ever made. Eight covers, all given the treatment, and two originals -- one of which sold two million copies. Yeah! is the quintessential "nice little record" -- it won't take up a lot of your time, and it's got a very friendly vibe to it. The cover songs span a wide variety of musical styles, which isn't that surprising, considering that guitarist/vocalist Cub Koda has a deep knowledge of music history. From Hoyt Axton's "Lightning Bar Blues" to then-unknown Jimmy Cliff's "Let Your Yeah Be Yeah" to Lou Reed's "Sweet Jane," the band pumps out all of its songs in a chugging, lighthearted manner that ends up being nothing but fun.

Lead vocals were previously the exclusive domain of bassist Michael Lutz, but Koda emerges as a singer as well; Lutz may have been the more prototypical rock singer, but it was Koda's sleazy, nasal snarl that worked to perfection on the classic hit single "Smokin' In the Boys Room." While the success of "Smokin" opened a lot of doors for the band, it also pigeonholed them in such a way as to render them almost un-arrestable only a couple of years later. Between their wild onstage antics and the fact that the follow-up album, School Punks, was a blatant attempt at cashing in, the band lost a lot of the credibility they had earned by playing straight-ahead rock & roll. Although Brownsville Station would never again capture the magic here, Yeah! easily stands the test of time -- it's truly delightful.
by Geoff Ginsberg 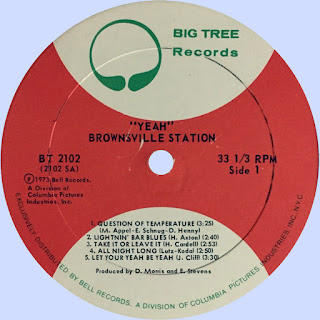 Free Text
Text Host
Posted by Marios at 8:28 AM No comments: