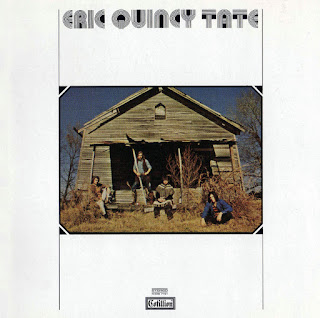 Eric Quincy Tate were not a person, they were a band -- a quartet of down-and-dirty swamp rockers, Naval reservists stationed in Quincy, MA, but based down South, playing regularly in Texas where they were discovered by Tony Joe White, who shared a similar taste for blues, R&B, and soul. White helped get them signed to Capricorn and produced their self-titled 1971 debut, which sank into collector cult status not too long after its release and remained there until Rhino Handmade reissued it in 2006. Upon that reissue, the record was revealed as a real lost gem, something that could hold its own with Tony Joe White's own classic Monument albums, of which it's very reminiscent.

Like Tony Joe, Eric Quincy Tate is pure swamp pop, mixing up soul, blues, country, and rock & roll into a dynamite concoction of thick, funky roots rock. EQT could really play, which makes the fact that they didn't play on their debut all the stranger. When EQT entered the studio, the quartet found the Dixie Flyers -- the name of engineer Stan Kesler's studio band at the Sounds of Memphis studio -- all set up, ready to play. Only vocalist/drummer Donnie McCormack and guitarist Tommy Carlisle, EQT's two songwriters, were allowed to play on the album, with the Memphis Horns added later as overdubs. According to Bill DeYoung's liner notes to the 2006 Handmade reissue, nobody remembers who made the decision to use the Dixie Flyers as the core band -- Tony Joe White and Jerry Wexler share producing credits with Tom Dowd, who worked on the final bit of the record -- and the decision to use studio pros is a bit odd, as the three demos, alternate takes, and unreleased cuts featured on the reissue showcase a gritty Southern rock & roll band, one that was looser and funkier than the one that finished record, but all the more appealing because of it.

The Eric Quincy Tate reissue is also graced with the presence of none other than Duane Allman, who happened to be in the studio as a guest of Wexler, so he played some impromptu slide on the demo for "Goin' Down," unveiled here for the first time. It's not just Allman who gives the demos a dirtier, bluesier feel: without the overdubs of the horns and the tight attack of the Dixie Flyers, this is lean, hard rhythmic rock instead of the punched-up soul of the finished album. Not that there's anything wrong with the original Eric Quincy Tate as an album -- far from it, really. McCormack and Carlisle were fine songwriters with an ear for blending soul, blues, and rock so there were no borders between the styles, and the Dixie Flyers helped give the music an assured momentum that made it more commercial in 1971, even if the album went nowhere on the charts. Despite its lack of success, Eric Quincy Tate has aged very well -- the songs sound like buried gems and the music itself is the kind of deeply rooted roots rock that sustains its appeal, even increases it, upon repeated plays.
by Stephen Thomas Erlewine

Eric Quincy Tate started out in the mid-'60s as a Gulf Coast six-piece, The Kings, before Uncle Sam put four of its members on the USS Essex. After finishing their service, the quartet was back gigging in Texas, where they made a strong impression on Tony Joe. White was instrumental in getting the group an audition with Capricorn Records, and demos recorded there caught the ear of legendary Atlantic producer Jerry Wexler. The self-titled debut from Eric Quincy Tate - a marvelous mix of blues, soul, rock, and straight ahead funk -- followed in January 1971.

For this new reissue, seven previously unreleased bonus cuts from the Capricorn sessions follow, including embryonic versions of three album tracks () - one of which, "Comin' Down," features a guest appearance from slide guitar master Duane Allman, a storming take on "Gimme Some Lovin"," and three additional Eric Quincy Tate originals.
Rhino 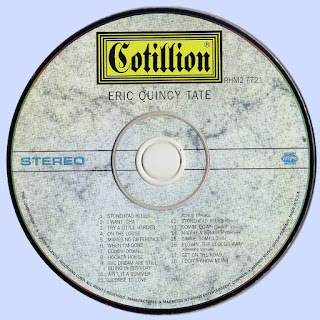