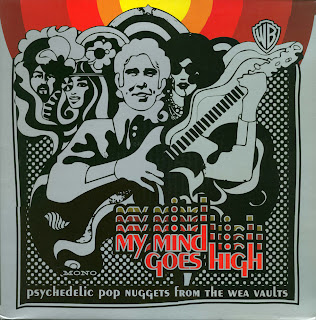 «My Mind Goes High» is a true excavation of the vaults, picking overlooked album tracks and neglected singles from a cornucopia of WEA-owned labels, including Warner Bros., Cotillion, Jubilee, Valiant, Reprise, and Atco.
While the focus is on acts that released a single or forgotten album, there are a handful of recognizable names -- the Association, Kim Fowley, the Electric Prunes, the Bonniwell Music Machine, the Tokens, the West Coast Pop Art Experimental Band -- and in the Monkees' "Porpoise Song," there's even a genuine hit. But that song is the exception to the rule: most of these are quite obscure, and it's even arguable that because they were released on major labels (or at the very least, high-profile labels), the songs haven't been given the attention or respect as psychedelia released on smaller, regional labels.
That argument is laid out in the introduction of the excellent liner notes, and the music on «My Mind Goes High» supports it strongly. Often, collections of rare heavy psychedelia and garage rock can grow a little samey even when the musical quality is high, since bands tended to emulate the same sounds and ideas, using the same production techniques as their peers. «My Mind Goes High» is a much more interesting listen than the average psychedelic rarities collection since these underground ideas are applied in bizarre, unpredictable ways to professionally written, melodic songs that were designed for mainstream radio.
Where its companion collection, Come to the Sunshine, is heavy on lush surfaces and harmonies, «My Mind Goes High» is overtly trippy and psychedelic, filled with fuzz guitars, echoes, phased vocals, organs, studio effects, and minor-key drones. This brings it closer to familiar Nuggets territory, but there's a much heavier emphasis on studiocraft and production here than there is on anything on the original double-vinyl Nuggets or Rhino's original box set; again, the focus is on the record, not the song, even though there are some excellent songs here.
Nevertheless, the sound and effects of the productions are the most memorable aspects,  Jeff Thomas' "Straight Aero," quite likely the trippiest square anthem ever recorded, has a weird undercurrent of menace in its hiccupping bass and clanging piano.
«My Mind Goes High» is filled with moments as strong as this, and it makes a convincing argument that psychedelic pop is at its best when it's pure, undiluted ear candy like this. It's not just a good introduction to the charms of psychedelic pop; it holds its own next to any collection of freaky, guitar-fueled garage-psychedelic rarities.
by Stephen Thomas Erlewine 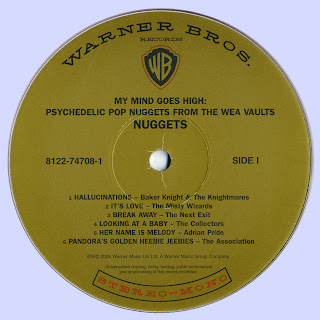 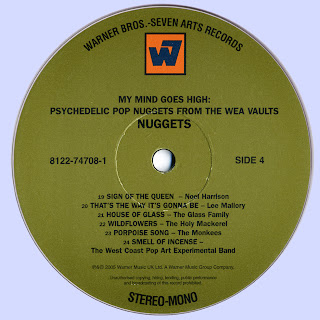