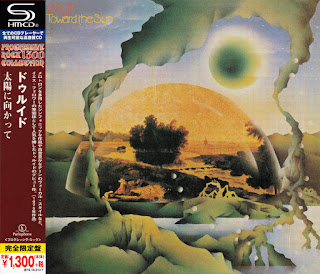 Formed in 1971 by old schoolmates Dane Stevens and Cedric Sharpley, along with local bass player Neil Brewer, Druid spent years playing clubs as a trio before winning a competition by Melody Maker for the best unsigned band. At this point they added Andrew McCrorie-Shand, a recent London College of Music graduate.
The Melody Maker prize included new instruments and a recording contract, and their debut album appeared in July 1975 among envious whispers by rival bands and music publications. The band had a difficult time shaking the charge of hype, and they were also charged in some quarters as being Yes soundalikes -- Starcastle in the U.S. was later to be tarred with the same brush. () - In fact, Druid was an opening act at a number of Yes concerts. The Yes comparison, though an obvious one, is not entirely accurate. While Dane's vocals are clearly styled after Jon Anderson, and Neil Brewer's bass has the classic pick-driven Rickenbacker growl associated with Chris Squire, the rest of the band departs from the formula; McCrorie-Shand's unadorned keyboard parts, for example, have little in common with the lavishly baroque flash of Rick Wakeman or the martial Hammond pounding of Tony Kaye.
With the release of their second album in the spring of 1976, the band distanced themselves from their production and Melody Maker connections. It couldn't make up for the weaker material on their sophomore effort, and the band finally called it quits. Cedric Sharpley was to find success soon afterwards, though, by joining up with a new and unusual band led by an strange fellow named Gary Numan.
by Paul Collins 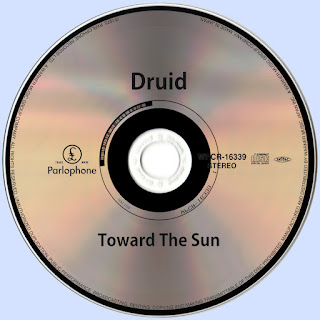