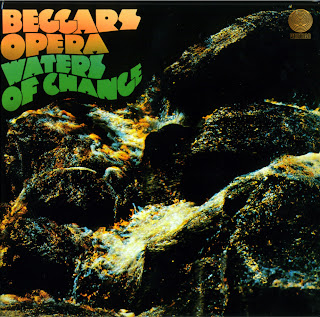 Beggars Opera are one of the most intriguing of all the bands to emerge from the Progressive Rock era of the 1970s. Hailing from Scotland the group was and still remains built around the talents of guitarist Ricky Gardiner and his wife Virginia Scott, who sings, plays keyboards and composes lyrics.

Still active today, but now based in Wales, the pair have released such albums as ‘Close To My Heart’ (2007), a richly varied and dynamic set of performances that took ten years to bring to fruition. This was mainly due to the effects of a medical condition known as ‘electro sensitivity’ that has affected Ricky Gardner for many years. This is brought about by exposure to radiation from mobile phones and computers. Ricky and Virginia have based their latest album ‘Lose A Life’ (2011) on the theme. Sub-titled a ‘Nano Opera’ it is based on the story of his battle against ‘E.S.’

Roderick ‘Ricky’ Gardiner’ was born in Edinburgh, Scotland in 1948. He has enjoyed a busy career, including working with David Bowie and Iggy Pop. But his first brush with fame came when Beggars Opera was formed in 1969. The original group was based in Glasgow and took its name from the ‘The Beggar’s Opera’ a play by the poet John Gay. Ricky began playing guitar in bands at the age of 14. Among his earliest groups were the Kingbees, Vostoks and the System. Beggars Opera first comprised Gardiner (guitar, vocals), Martin Griffiths (lead vocals), Alan Park (organ, piano), Gordon Sellar (bass, acoustic guitar, vocals) and Raymond Wilson (drums). Virginia Scott (Mellotron and vocals) joined later.

The group signed to Vertigo, alongside Black Sabbath, Colosseum and Manfred Mann’s Chapter Three. They released four albums over the next few years, ‘Waters Of Change’ (1971) was their second , the band had now added a female mellotron-player named Virginia Wolf who also wrote some material for the group too. Openoing track "Time Machine" has a relaxed and dreamy feeling to it, while "I've No Idea" and the folky "Festival" were both more energetic and excellent progressive rock tracks. "The Fox" was probably the most complex song the group ever recorded. "Silver Peacock" has a very beautiful mellotron arrangement, and especially the intro sounds cool. There are also some short and very nice instrumentals between the longer tracks. The best of these is probably "Nimbus". An essential album from the early 70's progressive scene of England.
Repertoire 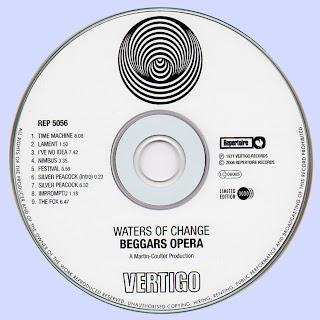