Crystal Circus were an American psych-rock band from Los Angeles that test-ran the album In Relation to Our Times on small-press All-American in 1968.
Most of the songs have nice, bouncy tunes with major/minor melodic alternations; pleasing sunshine pop harmonies; and appropriately psychedelic organ, fuzz guitars, trippy orchestration, vocal distortion, and odd effects. The lyrics might be superficially far-out, but again, impressions like those recorded in "Circus and Zoo World" are a good complement for this kind of candy pop-psych. Occasionally, they get into more of a straightforward garage-ish hard rock-soul blend, like on "Never Again," but it's the more ethereal and poppy numbers that stand out.
by Richie Unterberger 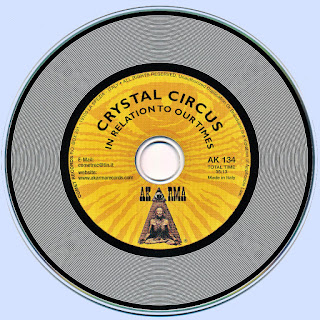