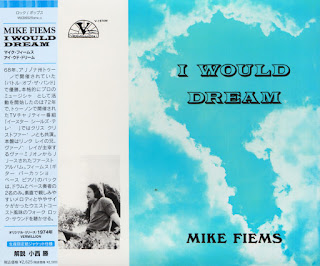 Wanting to “mellow” out in the early ’70s, Link Wray’s elder brother Vernon moved to Tucson, Arizona. There, he reassembled the infamous Wray brothers’ Three Track Shack, rechristening it his “Record Factory.” There, he recorded his classic, Wasted. In December 1973 and January 1974, he welcomed a Tucson-based songwriter named Mike Fiems into the Factory, where he served as the producer of Fiems’ I Would Dream. While the LP — recently posted in its entirety by the Tyme-Machine — shares a certain dusty sensibility with Wasted, also released on Tucson’s Vermillion Records in scarce quantity, I Would Dream is an entirely different beast than Wray’s busted heart record.
Mastered by a mysterious “Graybeard,” this is kaleidoscopic sunshine pop as played by sand-caked types. Fiems augments his natural child incantations with folk, soft rock and Sonoran country timbres. He plants his feet in two worlds, one wistful and one jagged. Opener “I Would Dream” sounds appropriately dazed, that is until Fiems curses and steers his sidemen — bassist Charlie Gould and guitarist/drummer Bill Kennedy — into rougher territory.
The lyrics, written by Fiems and his wife (or sister?) Coleen, are alternately naturalistic and doggedly rowdy. “The world is my woman, woman and my child,” Fiems sings on “My Lady,” with a piano that bears a resemblance to the elegiac barroom piano featured on Wray’s “Lonely Son.” Occasionally the record veers into theatrical territory: “Sing It” sounds like it wouldn’t be out of place in the hippie-fied Broadway musicals of the day. But mostly, Fiems mines a unique intersection between cosmic wanderings and rural grooves.
by J. Woodbury 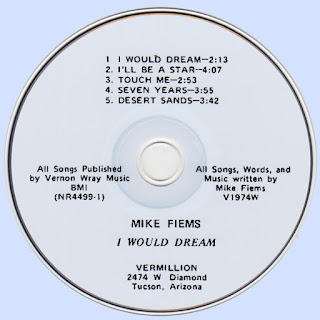