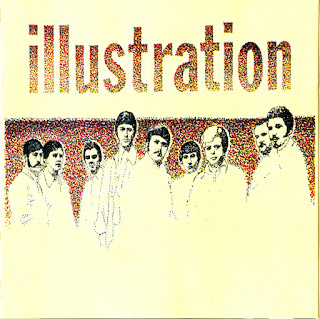 For those who care for music labels, “big band jazz-rock” was a popular musical genre that began in the late 1960s. Blood, Sweat & Tears and Chicago are the bands that typically come to mind. But these were by no means the only bands to fall under this label. Among such others were Archie Whitewater and The Ides of March; however, arguably the least known of these bands, and today unjustly forgotten, was the Montreal-based Illustration. Bands that end up long forgotten often deserve it for various reasons, but the lack of notoriety Illustration now suffers is certainly undeserved. Illustration was an excellent group that demonstrated superior musicianship in every way, but after only one formal record release, poor management led to the band’s untimely demise.

Formed at the Fontaine Bleu in St. Jean, Quebec in 1968, Illustration was essentially the combination of two other bands playing throughout Ontario and Quebec at the time: The Phoenix of Ayre’s Cliff and The Jades.

The Phoenix of Ayre’s Cliff originally began as The Dynamics, a group formed by guitarist Jimmy Mann. Throughout the mid-sixties, the band underwent various makeovers, beginning with Jimmy Mann’s departure and eventual return. Chan Romero, famous for his song “Hippy Hippy Shake,” replaced Jimmy Mann in the interim period, during which time the band was known as Romero and The Reputations, but subsequently left the band while the group was in Quebec. The Dynamics eventually became The Phoenix of Ayre’s Cliff, whose members were Hans Stamer on vocals, Bob Deutscher on guitar, Norman Burgess on saxophone, Kenny Brabant on drums, Ken Folk on bass, and Richard Terry on organ.

The Jades originally began as The Flaming Stars in the early 1960s and were led by drummer Don Carpentier. This band played together for nine years throughout Quebec and Ontario appearing at such notable venues as the Esquire Show Bar in Montreal. Billy Ledster was the vocalist for the band with Rene Hamelin on guitar and Johnny Ranger on organ.

By the late 1960s, members of The Phoenix of Ayre’s Cliff wanted to return to Western Canada, where most of them were from. Richard Terry and Norman Burgess, however, wanted to form a bigger group with which to go the United States. In particular, Richard Terry was intrigued by the Chicago-based group, The Mob, namely that band’s use of brass in its line-up, and wanted to do something similar. Norman Burgess had heard The Jades play before and thought they had the right sound. He proposed the idea of he and Richard Terry joining The Jades to realise their vision of a big band sound. When the two met organist Johnny Ranger and vocalist Billy Ledster from The Jades, who were performing at the Fontaine Bleu in St. Jean, Quebec in 1968, they agreed to form a new group, which, at Richard Terry’s suggestion, came to be called The Sound Syndicate. Don Carpentier and Rene Hamelin had different interests and declined to participate in the new band. With Johnny Ranger on organ, Richard Terry moved over to bass, and the band quickly began to grow adding Claude Roy on drums, who had previously played with The Jades, Benoit Perreault and Paul Perkins, from Boston, on trumpet, Garry Beattie, who had briefly played with The Phoenix of Ayre’s Cliff, on guitar, and Gerry Labelle on saxophone. The group was managed by Don Seat of Boston and began playing regularly at the Fontaine Bleu whereupon trumpeter Leo Harinen joined the group to replace Paul Perkins.

The Sound Syndicate had quickly developed into a nine-member group and was still expanding. While playing at Lucifer’s in Boston one evening in 1969, trombonist Roger Homefield sat in with the band and found himself a new member by the end of the night. Continuing to play various clubs along the east coast of the United States, the band was in Seaside Heights, New Jersey when Gerry Labelle left to pursue work in Chicago. In need of new saxophone player, the band acquired Donald Sanders, whom Richard Terry knew from the early 1960s, and his wife, Scherri Saint James, who contributed additional vocals to the band.

Having now eleven members, The Sound Syndicate was heard by manager Barry Wolfe who introduced the band to producer Alan Lorber. Alan Lorber was impressed with what he heard and signed the band for a one-record deal with Janus Records. The group began recording its debut album at A&R Studios in New York in late 1969. Eager to play their music, the band continued to perform at numerous venues on the east coast. The band once again changed personnel as Glenn Higgins joined the band to replace Donald Sanders who had left for Nashville to pursue other interests, and Billy Shiell joined the group in Miami adding a third trumpet. Prior to the band’s upcoming record release, Alan Lorber had a particular concept in mind and suggested that the band change their name. The band adopted their new name, Illustration, while playing at the Stock Market Club in St. Petersburg, Florida.

During this time, the group shared the stage with some notable performers. While playing at the Newport Hotel in Miami, Florida the band backed up Ike & Tina Turner and later performed with Joe Cocker, Rod Stewart, Miles Davis, H.P. Riot, and Funkadelic. The band also enjoyed critical acclaim with a very positive review in the June, 1970 issue of Rolling Stone Magazine and similarly positive reviews from John Wilson, a jazz critic for the New York Times, Dave Bist, a music columnist for the Montreal Gazette, and Dennis Washburn, a music columnist for the Birmingham News. As well, the band’s first single, “Our Love’s a Chain,” did quite well on Canadian radio reaching at least as high as 12 on the hit parade.

However, by late 1971 many of the members were growing increasingly weary of what they perceived to be poor management. Despite having enough material for their next album and an offer from Warner Bros. Records, the prospects for the group were fading. While in Montreal, Quebec, Illustration was approached to record some music for a French-Canadian film called Après Ski, produced by Jean Zaloum. Five songs were recorded at RCA Victor Studios in Montreal and released on the soundtrack to the film. According to Johnny Ranger, the group recorded the five songs without any overdubs and within a short time of just a few hours. However, the band was never credited for its contribution to the film due to legal constraints until the album was re-released in 2012 by Disques Pluton. Shortly after recording the soundtrack the group disbanded.

It is unfortunate that Illustration did not last. Their music was sophisticated and their musicianship was excellent. The band played with a unified musical soul that gave them a unique sound that was distinctly their own. No other band could match the power of Illustration’s six-member horn section. Clearly, talent does not always guarantee commercial success, for if it did, Illustration would have gone much farther and would be well-known today. As it happens, they are today almost completely forgotten but for a few who recall their music. In 2012, for example, the soundtrack to the film Après Ski was remastered and re-released on the Pluton label in Quebec, where that music has remained sought after and has enjoyed somewhat of a cult status. Many of the former members of Illustration, however, continue to be active in music today; and in spite of their brief stint, their music remains as impressive today as ever it was.
Maquiavelito 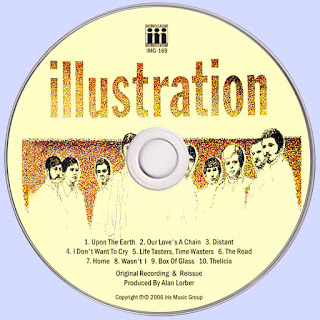 Free Text
the Free Text
Posted by Marios at 4:37 AM 4 comments: