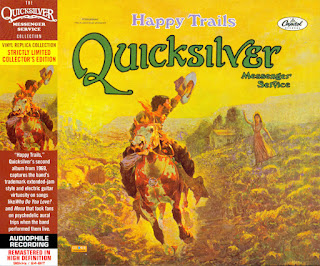 QMS formed in late 1965 and continued through several lineup changes until late 1967 when they settled into to what would be their most creative lineup of John Cipollina (guitar), Gary Duncan (guitar), David Freiberg (bass, vocals) and Greg Elmore (drums). They put off signing with a label for years to avoid the pressures of touring and consequently getting rushed by record companies into making albums not up to their own standards (a fate they witnessed befall several contemporary San Franciscan groups.).

Living on a ranch north of San Francisco in high style with their ladies, grass, guns and living out their space cowboy trips, QMS also benefited greatly from an abundance of local gigs they picked up in the absence of The Airplane or The Dead, whose unavailability was due to national tours and out of town engagements. And it was through this constant stream of live performances that afforded them the opportunity to tighten up every loose end in their repertoire while stretching out musically and evolving their sound beyond any reasonable set of expectations.

Comprised of four Virgos, their group name was as astrologically correct as it was perfect in describing their music’s characteristics. Chosen for its associations with Mercury (the ruling planet of Virgo and communication) as well as the double entendre for ‘quicksilver’ (the element, mercury) whose dual properties were simultaneously both liquid and metal, it was an appropriate description of the band’s own dual-guitar undulations.

A key influence on QMS (along with countless others) at this time was Bo Diddley, whose amplified cigar box and ever-shifting shuffle beat lent itself easily to interpretations of extended electric guitar-based improvisations with its simplicity, buoyant consistency and hard, sawn-off jagged primitivism that allowed itself to be employed as if it were some new aural material which was highly conductive to electricity and malleable enough to stretch out into spaced-out plasticity. And in the hands, heads and hearts of QMS, two of his numbers would turn into sprawling epics. A cover of his “Who Do You Love” (credited on the original album as “Who Do You Love Suite” and comprised of six separate ‘movements’) spanned the entire first side of “Happy Trails.” The entire album was recorded live at The Fillmore East and West in 1968, and the sparks just flew all over the place.

Cipollina and Duncan exchange solo and rhythm duties on “Happy Trails” so effortlessly that despite the production’s extreme stereo separation (Duncan on the left channel, Cipollina on the right) it’s never anything but a seamless series of intuitively placed fits of opposing forces with an undying attraction to each other. At times Duncan’s rhythm is a fat, toned-down punk buzzsaw working as a wash against Cipollina’s agile counterpointing and sometimes Cipollina’s solos are the smallest of strategic rhythmic strokes while Duncan’s rhythm playing at times appears more like solos rendered in shorthand. These free-flowing qualities were accented with carefully controlled, soaring feedback and stinging arpeggios of the purest tones.

These numerous and spectacular displays of twin guitar exchanges are supported by the impeccably synchronised rhythm section composed of David Freiberg on bass (and accompanying brusque vocals) and the perfectly restrained drumming of Greg Elmore. This backing was uncluttered and tough enough to allow the group’s paces to ebb or flow at a single moment’s notice: as gracefully evident in the manner in which “Who Do You Love” constantly shifts, unfolds and turns into passages both reflective and active. By the time they reach the middle passage (subtitled “Where You Love”) they’ve brought it all the way down to so the guitars are now more a cross-stitching of muted, across the bridge picking approximating the tinkling of mechanical chimes. Volume control knobs on guitars are tweaked to neatly stagger the otherwise feedbacking sound signals into blocks of zapping noise.

A wafting current of slight feedback tilts into the near-quietude as the appreciative Fillmore audience starts clapping along in time with the bass drum, and soon it’s all panning from speaker to speaker: yelps and cries from the stage and audience until what was once Bo Diddley has now been reduced to the simplest elements of communal grooving and joy and the group are in no hurry to fall back into the song until the last grunt, handclap and cry has been squeezed out. But they do when Cipollina tears a single, screaming note outta his SG with a twist of Bigsby whammy bar to signal the lurch into the breakneck pace of “How You Love”: a showcase of his quickly incisive and multi-directional arpeggio’d notes that scatter and flee to all four corners of the Fillmore but always regroup back into the ever-ascending main riff. After they cool off during Freiberg’s bass solo spot, they’re quietly circling back over “Who Do You Love” proper. All is simmering until they finally decide to go for broke one final time. Before they hit a final cluster of building crescendos, Freiberg and at least two other members have been vocally going for it by yelling bits of the lyrics over the tumult of guitar riffs and Elmore’s now constant swish of cymbals. But after a series of short solos and heat-generating noise and whining feedback, it elegantly drops off...to roars of applause.

The announcement “This here next one’s rock’n’roll” begins side two with the other Bo Diddley interpretation, “Mona.” Thudding tom-toms and Freiberg’s throb/pulse bass line propels the track as ringing feedback trails off from Cipollina’s amp and juxtaposed against Duncan’s rhythm riffing grind-outs. Eventually dropping down in volume so that an amp hissing like a street sweeper in the distance is audible, Cipollina switches to wah-wah and adjusts his loose guitar cord and the energy is crackling just as sharply. The tom-tom heavy main refrain returns and the band jumps in, only to see things halt and head immediately into “Maiden Of The Cancer Moon.”

The two solos that erupt on this track are nothing short of volcanic and although this was a Duncan composition, it appears that the solos are pure Cipollina in full flight/total heat complete with hallmark whammy bar, distortion and howling feedback. It continually returns to a shaded riverbank at dusk where cool respite is found -- but the calm is soon interrupted by an irritable scratching guitar pick run up against the grain and full length of a guitar neck with accompanying swooping, sonorous feedback. There’s a final low throttling of guitar that’s about the nastiest sound on the entire album, falling into the quiet whistling down the desert winds of the live in the studio instrumental, “Calvary.”

For years I always misinterpreted it as “Cavalry” because its near-Morricone spaghetti western instrumental feel creates instant vistas of adobe villages, Spanish tiled rooftops and horse charges under the burning desert sun (But a cry of “Call it anything you want!” towards the end was probably an auto-suggestive incentive.) But the scope and depth of its impressionism of “Calvary” does intimate a musical interpretation of SOME vast human struggle in the desert. This epic sweeps across the deserts as much as the howling winds and droning dust/freakstorms of dark conflict that build and rage throughout with ever-reoccurring dark squalling of feedback as vibrato’d, piercing feedback like teams of whinnying, ghostly steeds. Some eons later, the dense clouds finally subsist and dissipate and guitar playing from an indefinite past age emerges as gentle scratchings of acoustic guitar, wood and flints are picked up from the scattered debris, before the final gusts blow it all away...

The lazy western campfire of “Happy Trails” ends the album on a heartwarming note as clip-clop percussion, piano and drawling vocals from Greg Elmore bids the listener farewell. Whistling takes us down the dusty trail, as jingling spurs head into the distance of a brightly setting sun on the plains, closing a unique album that was like no other.
by The Seth Man, May 2002 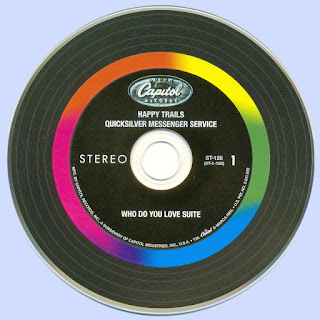