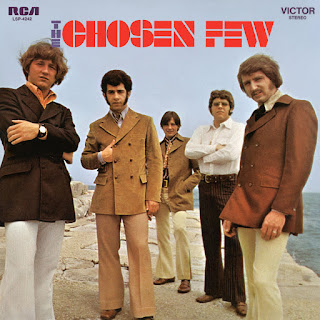 The Chosen Few were a horn-rock group from Muncie Indiana and consisted of Carl Storie (lead vocals-percussion), Jack Hamilton (bass), Dave Bennet (electric/acoustic 12 & 6 string guitars), Dave Barnes (drums) and John Cascella (keyboards).
The group, originally a garage band, had earlier recorded for the local Denim label, releasing four singles among them "It Just Don't Rhyme" and then released a single on the Talun label which led to their contract with RCA.
Surely inspired by the success of such bands as Blood, Sweat & Tears, (and the sound that was popular in the Chicago area at the time), the group changed musical direction and with the help of Pete Dino and Lee Holdridge added horn arrangements to their sound. Speaking of B, S &T and Chicago, there are early remakes of “You Make Me So Very Happy” and “Beginnings” here, but the redeeming cuts here are “Safrowillie” (wish there were more cuts like this) and the album's closer "I Will Miss You".
by Jack Dominilla 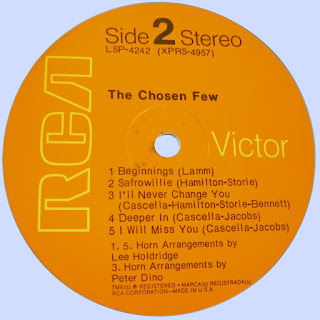