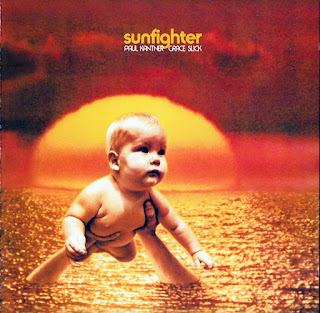 More than anything the Airplane has ever done, Sunfighter sounds most like an extension of “I’d Swear that Someone Was There” and “What are Their Names” from the David Crosby LP, both in theme and arrangements. The instrumentation is performed by the same David Crosby, Jerry Garcia, Steve Stills etc. crew, as well as Kantner. Electric violin work is done by Papa John Creach.

Most of the songs deal with the problems of the human race; Man’s inhumanity to man, overpopulation, and evil.

Time and again, the theme of looking back on the ruined land called America many years after it’s demise, comes up in Kantner’s work. “Earth Mother” could have fit well in Kantner’sJefferson Starship album with it’s science-fiction theme. “Remember what we sang/ Remember how we danced/ In America so many years ago.”

All the songs on the album follow the same vocal pattern, in which Grace and Paul both sing simultaneously, while Grace holds each note a bit longer than Kantner, with the exception of “China.” “China,” in which Grace solos, sings the praises, hopes and the fear of raising her’s and Kantner’s child. “I hope she sees something to make her life happy.”

There is truly no one song that fails on the album, musically or lyrically, yet of all the songs, I find “Diana” the best. Although it is less than a minute in length and is continued on the opposite side as “Diana 2,” the mythological theme and the excellent vocals make the song one that will last as a classic for quite a time. “Diana/ Huntress of the moon/ Lady of the Earth.”

Not absent is the poetry cry for man’s return to nature. “Look at the Wood” is the story of humans raised in the wonders of nature. Perhaps. I am overemphasizing the lyrical aspect of this album, but actually, it is hard not to. It is a rarity when the quality of the lyrics and the instrumentation both reach the level of excellence they reach in this LP. Too many songs, or even albums, suffer from the repetition of the usual poetic cliches.

Grace Slick’s and Kantner’s talents as lyricists have gone almost unnoticed until now, and it is about time that their work be given the credit it deserves.

Credit must also go to the arrangements which paint as much imagery as the lyrics do. For the most part, the instrumentation is kept simple but not barren. In this period where Spectorisms are so frequent, it is quite refreshing to find an arrangement that is not in the least bit pretentious.

Sunfighter is a mystical album, almost a mysterious album. Despite the fact that it’s success is guaranteed because of the fame of the group Kantner and Slick regularly record for, the album definitely stands on it’s own merit as an excellent one.
by Cameron Crowe, "San Diego Door" January 13, 1972  – January 27, 1972 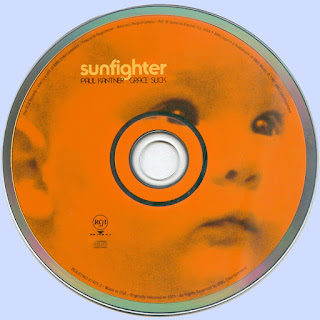 Free Text
Text Host
Posted by Marios at 7:24 AM 1 comment: