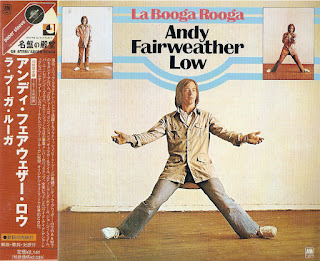 Andy Fairweather Low was born in Cardiff, Wales, Fairweather Low formed Amen Corner in the mid-'60s, for which he served as lead singer. The group scored six U.K. hits from 1967 to 1969, the biggest of which was the number one "(If Paradise Is) Half as Nice." Its success put Fairweather Low's attractive face on the bedroom walls of teenage girls all over Britain. Amen Corner broke up at the end of the '60s and evolved into the more progressive Fair Weather, which scored a hit with "Natural Sinner" in 1970, but broke up in 1971.

Fairweather Low retired for several years, but returned as a solo artist in 1974 , "La Booga Rooga" is his most successful record, this continues his eclectic approach, starting off with the steel guitar-drenched cover "My Bucket's Got a Hole in It" and also featuring the cocktail lounge pop of "Champagne Melody" and the funky title track (a U.K. hit for the Surprise Sisters), plus his biggest solo single, the whimsical "Wide Eyed and Legless."

Fairweather Low made a series of albums through 1980, reaching the U.K. Top Ten with the singles "Reggae Tune" and "Wide Eyed and Legless." Gradually, however, he began to work as a sideman to more prominent British musicians, notably ex-Pink Floyd leader Roger Waters, and with the ARMS benefit group in 1987. He toured Japan with George Harrison and Eric Clapton in 1991 and has since been part of Clapton's backup band. Fairweather Low began touring with Bill Wyman's Rhythm Kings and, in 2006, hit the road again with Waters for the Dark Side of the Moon Tour.
by William Ruhlmann 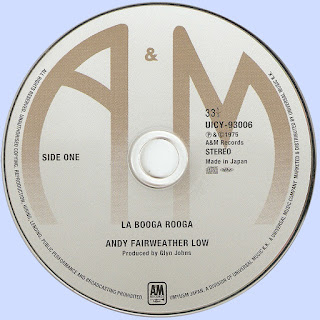 Free Text
the Free Text
Posted by Marios at 6:17 AM No comments: