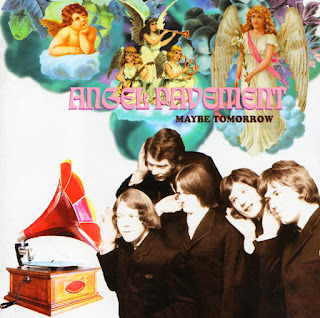 You’re forgiven if you have never heard of the psychedelic/sunshine pop band Angel Pavement which formed in York, England in 1967 and disbanded just four years later. The band only released a couple of singles which didn’t do well on the charts and disagreements between the band and their label prevented their first album from ever seeing the light of day. The band did have a following in their hometown but it never translated to country wide success, thus relegating them to underground status. The good news is the band’s tracks have been indelibly preserved on the compilation titled Maybe Tomorrow, released on the Morgan Blue Town label, a subsidiary of Secret Records Limited. This edition comes as a six panel digipack with twenty-eight tracks spread over two CDs and includes an extensive booklet.
The band’s music clearly references The Hollies and The Beatles, major influences for sure and I have to say this CD is a real treat, especially suited for anyone who enjoys psychedelic/pop rock of the era.
This was a talented band with lush vocal harmonies and tasty guitar all over the place, sometimes in the form of pretty acoustic arpeggios or jangly electric rhythms. No matter, it’s all tastefully executed beginning with the upbeat pop of “The Man In The Shop On The Corner”, emphasizing the band’s penchant for great melodies. Lovely acoustic guitar and lush vocals highlight “Time Is Upon Us”, with a sparser arrangement but no less of an earworm. “Socialising” is part ballad, part up-tempo pop rocker while “Jennifer” is pure ear candy with its feel good melody and tasty vocal arrangement. The playful and childlike “Water Woman” and the incredibly lush psychedelic pop of the Beatles inspired “Little Old Man” are more nice tracks.
The second disc also contains some nice surprises like the hippy soaked jaunty pop of “Phantasmagoria”, the languid psych pop of “Rooftop Memories”, the harder driving rhythm section in “Tootsy Wootsy Feelgood” and the wonderful guitar melodies in “Flying On The Ground (Is Wrong)”. The gorgeous melodies and vocals in “I’m A Dreamer” and the lush Beatles-ish “Maybe Tomorrow (early mix)” are more stand out tracks.
Listening to Maybe Tomorrow has been like a breath of fresh air. Music like this just isn’t made anymore but if you want to be taken back a few decades I can’t recommend this one enough.
by Jon Neudorf 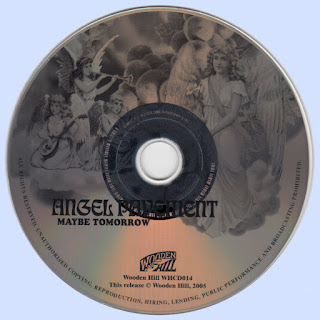