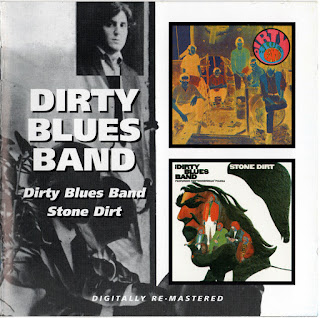 The Dirty Blues Band was a white blues outfit best known as the stamping grounds, for a time, for Rod Piazza and Glenn Ross Campbell. The group was spawned in Riverside, CA, from a convergence of members of a handful of notable local outfits -- their rhythm section, John Millikan (drums) and Les Morrison (bass), were high school classmates who'd previously played in the L-J's, whence also came keyboard player Pat Moloney. The L-J's had started out playing jazz in 1964, but by the end of 1965 had evolved into the Mystics, a much more blues-focused outfit, whose ranks included Bob Sandell on rhythm guitar and Rod Piazza on lead vocals and harp. Their main influences were such British Invasion bands as Them (whose "Mystic Eyes" had provided their name), the Animals, the Yardbirds, and the Rolling Stones -- although nominally a blues band, their sound was really more an amalgam of blues and R&B as done by those groups

That all changed when Piazza and a couple of his bandmates went to a performance by the Byrds at The Trip in Los Angeles, where the opening act was the still mostly unknown Paul Butterfield Blues Band. What they saw and heard that night convinced the Mystics, especially Piazza, that they had to switch over to playing a purer form of blues. They ceased being the Mystics, taking on the name House of DBS (meaning Dirty Blues Sound) in 1966. There followed a lot of gigs in and around Los Angeles, where they honed their new sound and also lost their original lead guitarist, Jeff Ray -- in his place, Piazza recruited a friend of his from a band he'd once hung out with, the Misunderstood, named Glenn Ross Campbell. the Misunderstood had broken up and he was available and willing, and once he joined, the group's sound fairly blossomed, as Campbell became known for stretching out on his solos and improvisations for long minutes at their shows.

By the summer of 1967, with the beginnings of a serious rock music press, the House of DBS was getting proper coverage, and by the end of that season, they had a management and production deal with Lee Magid, who was best known in the business at that time as the manager of singer Della Reese. Magid produced their debut album and sold it to ABC Records, also facilitating a name-change to The Dirty Blues Band. Their self-titled debut album appeared in early 1968 on the ABC imprint Bluesway, and although the members weren't entirely happy with the results of the two days of rushed recording, they seemed to have a promising future ahead of them.

The military draft then reared its ugly head, and suddenly Millikan, Morrison, and Sandell -- the group's whole rhythm section -- were called up. Campbell exited by choice a little while later, seeing no future for the group. Ironically, they did carry on, however, with Rick Lunetta (guitar), Greg Anderson (bass), and Dave Miter (drums). That group, augmented by trumpet man Freddie Hill and saxmen Jimmy Forrest and Willie Green, got a second album together, entitled Stone Dirt. But by the end of 1968, even that second lineup had collapsed, and all concerned were pursuing solo and new group projects. Piazza and Campbell were the most visible alumni and, indeed, their presence in the band accounts for a significant part of the interest in their work, on the part of people who never did get to hear the original albums.
by Bruce Eder 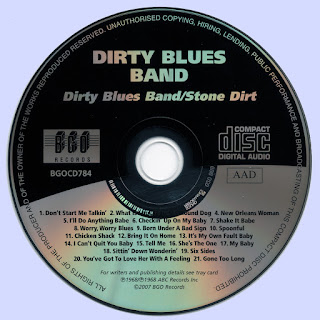 Free Text
Just Paste
Posted by Marios at 5:00 AM 4 comments: