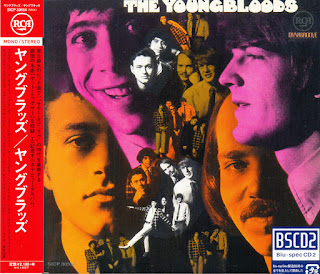 The Youngbloods could not be considered a major '60s band, but they were capable of offering some mighty pleasurable folk-rock in the late '60s, and produced a few great tunes along the way. One of the better groups to emerge from the East Coast in the mid-'60s, they would temper their blues and jug band influences with gentle California psychedelia, particularly after they moved to the San Francisco Bay Area. For most listeners, they're identified almost exclusively with their Top Ten hit "Get Together," but they managed several respectable albums as well, all under the leadership of singer/songwriter Jesse Colin Young.

Young got his start on the folk circuits of Boston and New York, and had already cut a couple of solo albums before forming The Youngbloods. John Sebastian was one of the supporting musicians on Young's second LP, and comparisons between the two -- and between The Youngbloods and the Lovin' Spoonful -- are inevitable. Both groups offered good-timey folk-rock with much stronger jug band influences than West Coast rivals like the Byrds, though The Youngbloods made greater use of electric keyboards than the Spoonful, courtesy of the enigmatically named Lowell "Banana" Levinger. The Youngbloods didn't craft nearly as many brilliant singles as the Lovin' Spoonful, but (unlike the Spoonful) endured well into the hippie/psychedelic era.

While Young was always the focal point of the band, their first two albums also had songwriting contributions from guitarist Jerry Corbitt. Produced by Felix Pappalardi (who also worked with Cream), these records (The Youngbloods and Earth Music) were engaging and mature, if inconsistent, folk-rock. Corbitt's "Grizzly Bear" was a small hit, as was "Get Together," a Dino Valenti song that had previously been recorded by Jefferson Airplane. The Youngbloods' slow, soulful interpretation of "Get Together" was definitive, but it wouldn't reach the Top Ten until it was re-released in 1969, after the song had been used in a television public service ad.
by Richie Unterberger

The Youngbloods' second long-player built on the strength of their self-titled debut by once again creating a blend of captivating songwriting with an infectiously fun delivery. Although the album failed to produce a definitive single -- as "Get Together" had done on their previous effort -- there are a handful of equally definitive sides scattered throughout Earth Music (1967). Featuring Jesse Colin Young (guitar/bass/vocals), Jerry Corbitt (lead guitar), Joe Bauer (drums), and Lowell "Banana" Levinger III (piano/guitar), The Youngbloods recall the uptempo good-time sound of their East Coast contemporaries, the Lovin' Spoonful, on the opening cover of the Holy Modal Rounders' "Euphoria."

The first of several stellar compositions from Young follows with the laid-back "All My Dreams Blue." In addition to the affective songcrafting, Banana's upfront piano fills provide a jazzy counterpoint to the interlocking Bauer/Young rhythm section. This refined power trio would become the mainstay of their later post-Corbitt recordings. "Dreamer's Dream" highlights Corbitt's inimitable contributions to the band with a highly affective melody as well as his unencumbered vocals, which effortlessly intertwine with Young. The countrified interpretation of the traditional "Sugar Babe" is a precursor to the direction that the band's sound would take after their relocation to the West Coast. The track became an international hit no doubt due to its inclusion in the Michelangelo Antonioni film Zabriskie Point (1970). Other standout tracks include the high-steppin' "Wine Song" and one of the better revisitations of Tim Hardin's "Reason to Believe."

Elephant Mountain (1969) is the Youngbloods' third long-player and marks their debut as a trio -- featuring Jesse Colin Young (bass/guitar/vocals), Joe Bauer (drums), and Lowell "Banana" Levinger (keyboards) -- after the departure of co-founder Jerry Corbitt (guitar/vocals). Although the band initially formed out of the early '60s Northeast folk scene, by the time this set was issued they had relocated to the pastoral Northern California county of Marin. Blending affective pop/rock melodies and lyrics with their good time jug band roots, the Youngbloods were instantly embraced by the already blossoming Bay Area music community.

This effort contains some of the band's strongest material to date, building on the considerable momentum of their 1967 self-titled release and further enhanced by their remarkable instrumental capabilities. Young's contributions are particularly notable as he vacillates between the edgy and electric "Darkness, Darkness" to the light and earthy "Sunlight" and "Ride the Wind," or the bouncy tales "Smug" and "Beautiful." Banana honors his new surroundings with the gorgeous and catchy instrumental "On Sir Francis Drake" (named after a heavily traveled Bay Area motorway). On this cut the textural combination of electric piano and harpsichord provides a jazzy counterbalance to Young's propulsive basslines and Bauer's nimble drumming.

The "Rain Song (Don't Let the Rain Bring You Down)" is left over from Corbitt's tenure and recalls the earlier Youngbloods' sound which was more akin to the Sopwith Camel or the Lovin' Spoonful than the trio's then-current folk-rock leanings. "Trillium" is a hidden gem of a jam that examines the band's remarkably strong improvisational interaction. "Sham" is perhaps the most straightforward rocker on the album and recalls Bay Area acts like the Sal Valentino-led Stoneground. The disc concludes with the sublime "Ride the Wind" which sports a very sophisticated and slightly Latin-flavored melody.
by Lindsay Planer 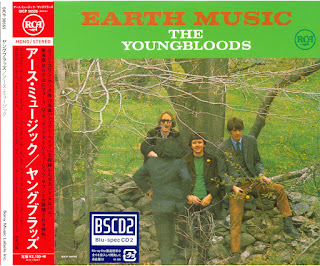 Free Text
the Free Text
Posted by Marios at 12:08 PM