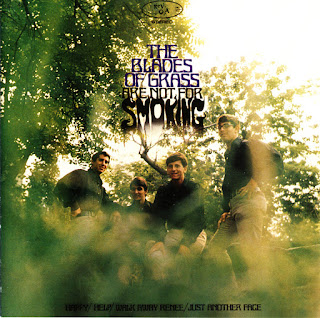 A young sunshine pop group that came from the East Coast rather than California (the home of most such acts in the '60s), the Blades of Grass had a mild hit in 1967 with "Happy." Their version made number 87, while a competing version by the Sunshine Company from Southern California got higher, making number 50. Actually the Blades of Grass' single was the much bigger hit in some markets, like New York, Washington DC, and St. Louis. But the two competing versions of the same song split sales, with the Sunshine Company, generally speaking, doing better in the western half of the country, and the Blades of Grass better in the eastern half.
Much of the Blades of Grass's personality was subsumed in the studio, where their tracks were given rather heavy orchestration, and where they seldom recorded original material. They were, however, a real band from the New York metropolitan area, with two of the members coming from Maplewood, NY, and the other two from South Orange, NJ. They were finishing high school around the time they recorded their only album, and unlike many groups from the time (even high school-aged ones), they boasted the clean-cut, short-ish-haired look that was actually much more common among average high schoolers in 1967 than long hair.
Recording for the Jubilee label, their Are Not for Smoking LP was lightly psychedelic-shaded pop, with good harmonies variously reminiscent in spots of the Mamas & the Papas and higher-voiced acts like the Happenings. The songs were more pleasantly romantic than memorable, however, even if they were densely and conscientiously arranged. The Blades of Grass did record a few additional non-LP singles in the late '60s before breaking up. The album, plus seven additional songs (mostly from non-LP 45s), was reissued on CD by Rev-Ola in 2002.
by Richie Unterberger 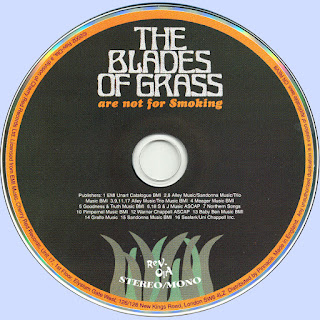