Sea Level - Cats On The Coast (1977 us, bright jazz fusion with southern flavor) 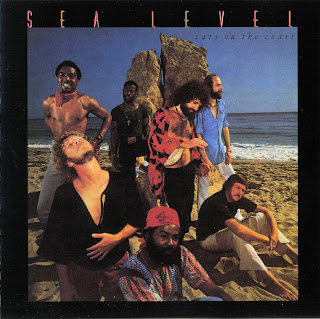 The cover photo of Sea Level's sophomore album, 1977's Cats on the Coast, depicts nearly twice the number of musicians as the cover photo of the band's eponymous debut album released earlier that same year. There's a lot of promise on display, and the music largely fulfills expectations.

This lineup bears remarkable similarity to the then-disbanded Allman Brothers, from whom Leavell, Jaimoe, and Williams had departed: two guitarists, two percussionists (well, sometimes), a bassist, a keyboardist -- and, importantly, Bramblett, a proven session man, saxophonist, and singer/songwriter with two acclaimed but underappreciated solo albums (1975's That Other Mile and 1976's Light of the Night) under his belt. Cats on the Coast wastes no time introducing the new singer with the Bramblett/Causey co-written leadoff track "That's Your Secret," building from pure Southern R&B/soul/funk into dual-guitar fireworks (Causey in one channel; Nalls in the other) that any Southern rock fan could appreciate.

Bramblett's somewhat oblique lyrics may lack the emotional immediacy his writing often possesses, but Sea Level clearly weren't about to introduce the singer with anything remotely approaching a downer ("This Could Be the Worst" could wait for the next album, On the Edge).

Leavell takes over the mike on the soul shouter "It Hurts to Want It So Bad," featuring the Muscle Shoals Horns, and Bramblett and Leavell trade off verses on the down-n-dirty Louisiana swamp blues-funk of "Had to Fall," which collapses into utterly unhinged howling derangement at the end. The mood is far calmer in "Every Little Thing," Bramblett's "let's-talk-it-over" display of sensitivity later in the track list. But Sea Level's instrumental skill was the main attraction on the debut, and here they arguably up the ante.

Leavell's "Storm Warning" stands with his best jazz-rock fusion numbers, but with stinging dual lead guitars the likes of which hadn't emerged from a Capricorn studio date since the Allmans left their blues at home on Idlewild South. Bramblett's soprano sax here, and his soulful alto on Neil Larsen's "Midnight Pass," add even stronger jazziness to the band's palette. Best of all is the two-part instrumental title track, with Nalls' slide approaching Duane Allman territory and Bramblett's soprano answering him in a stunning call and response; after a full-band climax, Jaimoe and Weaver take the track out under a flurry of simulated seagull cries.

The album then concludes with the brief "Song for Amy," a lovely and unexpected coda featuring Leavell on piano accompanied by a string quartet. Some great music from Sea Level was still to come, but the best moments of Cats on the Coast wouldn't be topped.
by Dave Lynch 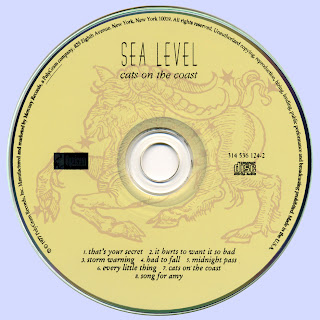