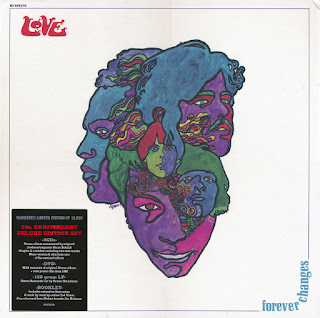 Forever Changes, the third album from the Los Angeles band Love, arrived on Elektra Records in November 1967 – the same month as The Moody Blues’ Days of Future Passed, Cream’s Disraeli Gears, The Beatles’ Magical Mystery Tour, Jefferson Airplane’s After Bathing at Baxter’s, The Hollies’ Butterfly, and The Monkees’ Pisces, Aquarius, Capricorn and Jones.  Psychedelia was in the air, not to mention creativity and experimentation in music at an all-time high that is still largely unrivaled.  Forever Changes emerged from this artistically fertile era in the mind of Love’s mercurial leader Arthur Lee, who was inspired to reveal his own, layered perspective in the wake of the Summer of Love.  Despite lukewarm sales upon its release, the album has only grown in stature over the years.  The new, deluxe 3-CD/1-LP/1-DVD 50th anniversary presentation by Rhino reveals it as an album that still sounds like no other, and one that bears repeated listening (preferably, in the various formats offered here).  It’s a reflective, sometimes elegiac album of textured acoustic guitars, evocative orchestrations, and vibrant studio experimentation with folk, jazz, and Latin flavors – all in service of some of the most interesting and unusual songs to come out of the period.  The new box set makes the case for Forever Changes as a masterwork – not that it was in doubt, anyway.

The album originally entitled The Third Coming of Love featured the five-piece line-up of singer/guitarist Lee, guitarist Bryan MacLean, lead guitarist Johnny Echols, bassist Ken Forssi, and drummer Michael Stuart.  Lee, MacLean, Echols and Forssi had been in the band since the beginning, with Stuart becoming part of the seven-piece line-up behind sophomore LP Da Capo.  Forever Changes would be the final album from this group, but little tension was evident on the record.  Lee co-produced with Bruce Botnick, welcoming contributions both from The Wrecking Crew’s Carol Kaye, Hal Blaine, Don Randi, and Billy Strange; and a 12-piece orchestra led by arranger-conductor David Angel.

The spellbinding, melancholy “Alone Again Or” (one of just two songs on the album not composed by Lee, but by MacLean) not only became the LP’s lone single but also was selected as its leadoff track.  It’s not hard to see why; its gentle, cascading, guitar-led melody lent itself to adornment with pensive strings and triumphant horns, including a Tijuana Brass-style trumpet.  It proved the perfect prelude to, and set the tone for, the varied music that followed.

Though the title of “A House is Not a Motel” seemingly doffed its hat to “A House is Not a Home” by Burt Bacharach and Hal David, writers of Love’s hit “My Little Red Book,” that’s where the similarities end.  “House” is an impressionistic and haunting rumination that touches on the horrors of the then-raging war, a theme that recurs throughout Forever Changes.  The mystical folk-ish “Andmoreagain” was one of two songs featuring The Wrecking Crew along with Lee and Echols on rhythm guitar.  The other was named for the famous fictional newspaper in which Superman’s alter ego, Clark Kent, worked: “The Daily Planet.”  The track, melding a reasonably commercial melody and production with a world-weary, surreal slice-of-life lyric, is revealed in the liner notes as “the catalyst for this classic album,” as the success of the session with the Wrecking Crew motivated the band members to realize their own increasingly sophisticated musical visions.

“Old Man,” written and sung by MacLean, had been performed by its author as early as 1966, but fit comfortably on Forever Changes.  David Angel added its effective orchestration (disliked by MacLean) to what’s essentially a stark folk song with a message that can be interpreted as advocating for one’s discovery of faith (in MacLean’s own case, Christianity).  Dark and wry, “The Red Telephone” ended the original Side One.  An answer or antidote to The Summer of Love, it finds Lee looking down from his hillside on turmoil and strife.  His voice is detached, distant, and ironically calm.  The gorgeous string flourishes underscore the drama of the psychedelic ballad.  Don Randi of The Wrecking Crew added the harpsichord.

Driven by Michael Stuart’s brisk drumming (encouraged by Lee) and stabs of trumpet, Side Two’s opening “Maybe the People Would Be the Times or Between Clark and Hillsdale” was rooted in autobiography as Lee recalled the band’s days playing on the Sunset Strip in whimsical, vivid fashion.  Lighter still is “The Good Humor Man He Sees Everything Like This,” a pretty reflection of childhood and innocence that stands in stark contrast to the tone of much of the surrounding material.  (Whether Lee is being ironic in the song is up to the listener.)

“Live and Let Live” was originally mooted for Da Capo but felt unsuitable for the band’s then-current lineup.  The paranoid and occasionally risqué composition was a better match for Forever Changes and boasts the album’s most searing electric guitar.  Rock and roll is also at the forefront of “Bummer in the Summer,” on which Lee adopted a Dylan-esque inflection spitting out rapid-fire lyrics.  Echols incorporated a country influence into his guitar part. Cross that with a Bo Diddley rhythm and you have one of the oddest tracks on the LP.  It’s eclipsed, however, by the closing “You Set the Scene.”  The epic track is actually a mélange of three songs penned by Lee and assembled by Forssi.  “You go through changes, it may seem strange/Is this what you’re put here for?” goes the lyrics to the mini-suite, as Lee questions life, mortality, war, and those forever changes (“Everything I’ve seen needs rearranging/And for anyone who thinks it’s strange/Then you should be the first to want to make this change/And for everyone who thinks that life is just a game/Do you like the part you’re playing?”)  David Angel’s suitably majestic orchestration befit the big themes being addressed.

Rhino’s majestic box set offers Forever Changes in multiple formats.  The original mono album is included on CD, and the original stereo album on CD, vinyl LP, and DVD (in 24/96 high resolution).  In addition, the box includes an entire alternate mix on CD 3 as well as a full disc of outtakes and singles on CD 4.  Most of this bonus material premiered a decade ago on Rhino’s 40th anniversary edition.  (The outtake “Wonder People (I Do Wonder)” in the alternate mix was first issued in 2001.)  Two previously unissued tracks, however, do premiere here: the backing tracks of “Wonder People” and “Live and Let Live.”

The alternate mix is derived from a tape that was prepared during the mixing process.  It’s a much rougher-hewn mix than the final, polished version and opens a window onto the choices made by co-producers Arthur Lee and Bruce Botnick in crafting the original LP.  As for the unique single versions and outtakes, they add to one’s understanding and enjoyment of Forever Changes.  Among the treasures are the final single from this iteration of Love (“Your Mind and We Belong Together” b/w “Laughing Stock”), released in June 1968, final and alternate backing tracks, session highlights (for “The Red Telephone”) and even an outtake of “Wooly Bully,” of all things.

The stereo version has been newly and felicitously remastered by Bruce Botnick, while Bernie Grundman has handled the mono mix.  This marks the first appearance on CD or a digital format of the mono mix, which was originally created with the Haeco-CSG system.  (The process converted a two-channel stereo mix into mono.)  Although far from revelatory, the punchier, rare mono mix offers a new way to hear the familiar album.  CD 3’s alternate presentation retains the 2008 mastering by Steve Hoffman, and CD 4 has been mastered by Dan Hersch and Dave Schultz.  (Hersch and Andrew Sandoval were credited with mastering of the same tracks in 2008.)  For the vinyl, Bernie Grundman has cut the lacquers from high-res digital files.  Which version one prefers of the original album will largely be up to personal taste; the stellar vinyl is quiet and striking, not to mention authentic.  The crispness, definition and intimate, up-front feeling of the stereo mix in 96/24 on DVD, however, is also hard to beat.  (The DVD also includes the promotional video of “Your Mind and We Belong Together.”

The set itself, produced with an eye for detail by Bill Inglot and Steve Woolard and beautifully designed by Now Sounds’ Steve Stanley, is packaged within a hardcover book-style package similar to what Rhino has employed for recent box sets from Ramones.  A 16-page softcover booklet is included with both a detailed essay and track-by-track notes by Ted Olson.  Brief notes on the bonus material are also present, as well as an introduction by Elektra founder Jac Holzman.  The discs are all held in pockets.  In every respect, this is an attractive and high-quality set that honors the album it represents.

Forever Changes would be the final album from this line-up of Love, and the final album for all members save Arthur Lee.  By the time of the band’s last LP (1974’s Reel to Real), he would be the sole true member, backed by a group of hired guns.  But Forever Changes captures a perfect moment from five talented musicians ready and willing to push the envelope to movingly chronicle their era.  50 years on, Forever Changes is no less beguiling – an album unlike any other and one clearly ahead of its time, as much as it is of that truly remarkable time.
by Joe Marchese, May 17, 2018 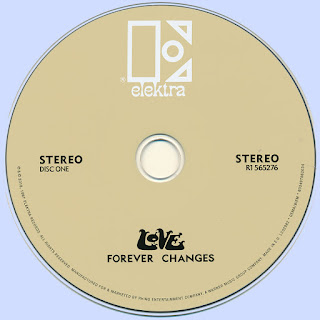 All songs written by Arthur Lee except where stated﻿ 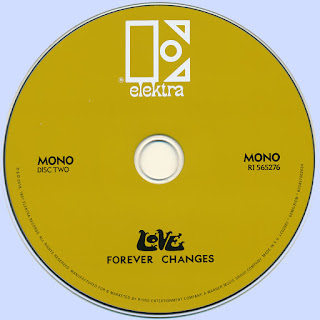 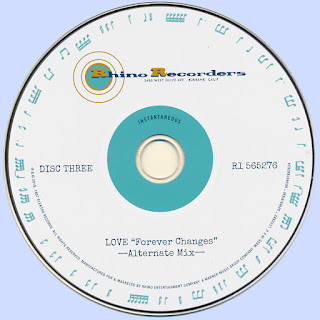 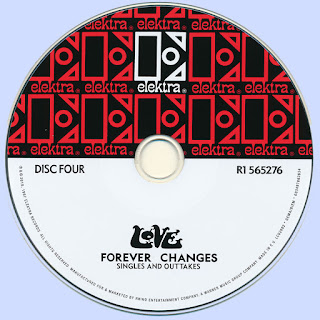