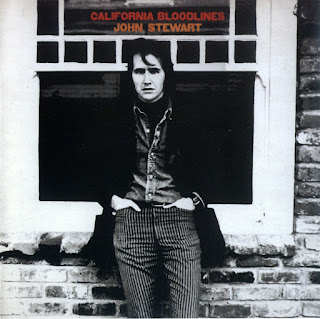 This may be John Stewart’s finest achievement although some fans might argue in favor of the great Willard from 1970.  California Bloodlines was John Stewart’s first true solo disc.  Recorded and released in 1969, Stewart used many of the same musicians as Dylan did for Nashville Skyline.  As expected this disc is much more rustic and country influenced than his work with either Buffy Ford or the Kingston Trio.  Regardless, this is a “must own” for fans of authentic American music.

It took me several spins and a few hours in deep thought to finally come to terms with this classic. John Stewart’s quivering, thin Johnny Cash-like vocals threw me off at first but now I see why many rate California Bloodlines as one of the premier Americana albums.  It’s stacked from top to bottom with great songs and intelligent songwriting.  The opener is one of Stewart’s classics, and while the studio side is excellent in it’s own way,  I prefer the full, live arrangement from October of 69 (Chris Darrow plays fiddle/mandolin on the live version).  Stewart’s songwriting is best heard on gems “Lonesome Picker,” “Missouri Birds,” and “The Pirates of Stone Country Road.”   These cuts are loaded with images of people and places from a bygone era.

He occasionally takes the historical viewpoint a la Robbie Robertson but his songwriting is certainly one of the album’s strengths.  If you’re a fan of Gene Clark or Mickey Newbury I’m sure you’ll be able to appreciate the awesome “Lonesome Picker.”  This track is a spellbinding masterpiece with haunting imagery and lyrics that still cut deep today. My favorite song from the album, “Never Goin’ Back,”  is another standout track that features plenty of buzzing fuzz guitar similar to the Burritos’ classic “Devil In Disguise.”  The rest of California Bloodlines is fleshed out with accomplished country-rockers and pretty country-folk ballads that have great melodies and tight arrangements.
by Jason Nardelli 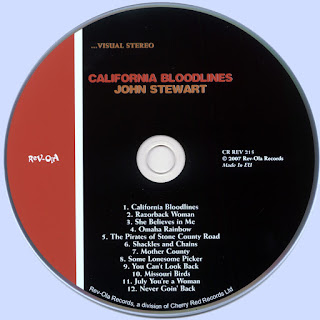 Free Text
the Free Text
Posted by Marios at 4:21 AM No comments: