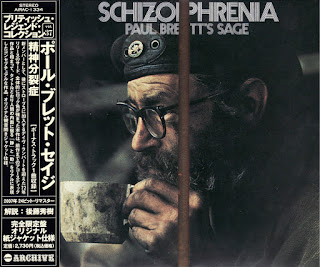 Schizophrenia, the third and final album, saw the group reduced to a trio with the departure of bassist Dufall. Although not replaced, the bass playing is uncredited, Brett's old friend from the Fire days, Dave Lambert, by this time a member of The Strawbs, added piano and organ to a few tracks. From the opening grooves of Custom Angel Man a new heaviness to the material could be heard with electric guitar hammering between the speakers. There was still an underlying acoustic vibe with piano and acoustic guitar forming the backdrop. Twin electrics also grace the marvellous Song Of Life - Song Of Death, possibly the only other 'rock' song besides Greg Lake's I Believe In Father Christmas to include sleigh bells! The vocals are also quite a bit rougher, giving the songs a harder edge, although the harmonies were still present on more commercial numbers like Charlene and the acoustic numbers like Tale Of A Rainy Night which really emphasises just how proficient Brett was on the guitar.

Slow Down Ma! is all over the place tempo wise, with a frantic rhythm set up by the congas of Voice accompanied by a real drum kit, played by another Strawbs member, Rod Coomes. The gentler passages have some nice lap steel guitar to add texture. Two instrumental numbers, Limp Willie and Bee are great guitar showcases, the latter featuring a solo acoustic and the former a couple of electrics, along with the sleeve note "Drink eight double rums and you can no doubt make up your own words"! As one might expect from the title, Take Me Back And I Will Love You is a sweet ballad, well mostly, it all gets rather heated at the end and seems to lose its original intent.

Autumn once again harks back to the style of the original album with flute and oboe (played by Rob Young), acoustic guitar, bongos, harmony vocals and some very tasty electric guitar. A wonderful song. Dahlia, a non-album single, has been added to complete the entire reissue of the songs of Paul Brett's Sage. A good tune that differs from the rest of the group's output in that it features some great violin work. This is undoubtedly by Mike Piggott, who replaced Cowell in the last line-up of the band, despite the sleeve notes stating that the violinist never recorded with the group (Piggott's web site states that he recorded with Brett in 1972, but no other details are given!)
by Mark Huges 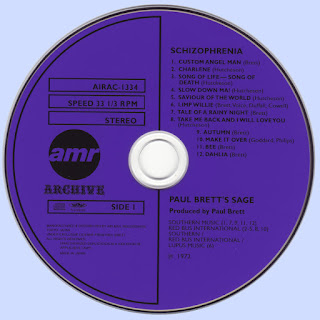 Free Text
Just Paste
Posted by Marios at 7:06 AM 3 comments: