"Absolutely" was Boxer's and Mike Patto's final album.  Mike was the only member of the original lineup on the album.  Chris Stainton, who contributed on the "Bloodletting" from 1976, played most of the keyboards.  Tim Bogert's (Cactus, Beck Bogert & Appice et al.) creative bass playing is prominent throughout the album.  Adrian Fisher had the challenge of filling Ollie's shoes on guitar.  Adrian and Eddie were probably session players primarily.  Adrian played on a Sparks album that was produced by Muff Winwood, the producer of the Patto albums.
Of course, with the completely new band lineup, the "Absolutely" album is very different from the first two Boxer albums.  It moves away from the rawer, straight-ahead rock approach with a slicker production and more finessed instrumentation.  Mike's vocals are still in fine form -- he sounds great throughout the album.  While Adrian and Eddie are solid musically throughout the album, Tim Bogert's bass and Chris Stainton's keyboards perhaps dominate the musical side of things.  Tim Bogert's bass playing is particularly impressive, but it seems a bit too busy on some of the more simple tunes -- maybe too much of a good thing?
Mike collaborated with all the band members to write the album's material.  "Big Lucy", "Red Light Flyer", the Randy Newman-esque "Everybody's A Star...", and "No Reply" (despite the terribly out-of-place musical extravaganza after the first verses) are among the better cuts on the album..  Mike delivers a great vocal on "As God's My Judge".  "Rich Man's Daughter" is a remake of the version recorded by the original Boxer lineup for the 1976 "Bloodletting" album, which was not  released until two years later in 1979.
"Everybody's A Star..." was released as a single in the UK with "Can't Stand What You Do" as the flip side (Cat. # Epic EPC 5540).  A promotional single with a picture sleeve was also issued and contained the "No Reply" track.
PattoFan 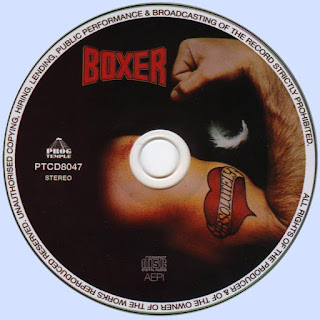