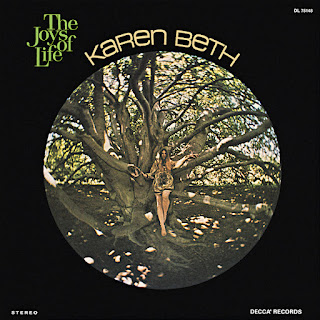 The Joys of Life is Karen Beth’s best early album which was released off Decca in 1969. Beth was not a popular artist so it was strange when this underground record peaked at #171 in Billboard’s Top 200 in 1969. The good thing about The Joys of Life is that it’s a strong record without a steep price tag and easy to find on vinyl – just check your local record dealer or better yet, ebay.
Beth’s vocals are a mixture of Karen Dalton and Buffy Sainte-Marie and the album is a beautiful blend of rural folk, lite psychedelia, and the more downer elements of the singer-songwriter genre. The album opener It’s All Over Now has one too many horns and is by far the lp’s weakest track. After this, there are no false starts or wasted notes; this album is completely solid all the way thru. The title track is an unsettling acid folk masterpiece that begins to rock about mid way thru and is highlighted by organ and vibes. Song to a Shepard is an impressive, stark vocal that sounds centuries behind, similar to what the English folk-rock groups were doing from around the same time. Other tracks reach into deeper, darker moods, just listen to Something to Believe In and the excellent Nothing Lasts. The former is a disturbing slice of spooky folk-jazz paranoia while the latter is a majestic, melancholy folk-rocker. White Dakota Hill, another great track, is wistful with a slight C&W feel that gives this album variety and substance.
Anyone into Margo Guryan or Linda Perhacs is strongly urged to track this record down. The Joys of Life really deserves a first time cd or vinyl reissue as it’s a pretty unique record that needs to be heard by more people.
by Jason Nardelli 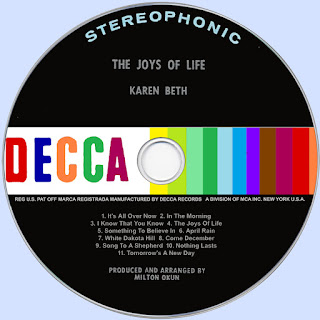