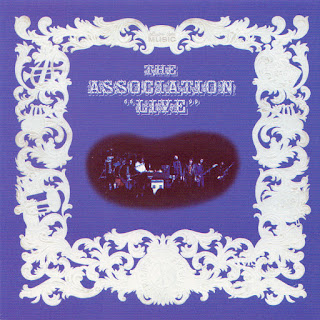 The Association had their last Top Forty hit in 1968, but were still a popular concert attraction as the new decade began. Recorded live at the University of Utah on April 3, 1970, the double-LP Live encapsulated their career highlights and added a few lesser-traveled items as well. It also gave fans a chance to hear the group as they sounded on stage, away from the studio, where top Los Angeles session men often handled the bulk of the backing tracks.

Asked to compare the group's sound live and in the studio, the Association's Jim Yester responds, "Live was a lot more visceral, because it was a lot more bare-bones. But we structured things so that we could, live, cover at least the high points of every arrangement, so that the people would get the same feeling. Get, if not exactly the same instrumentation, the same impact of the instrumentation. We were very concerned about our live performance. A lot of stuff that we did in the studio, we would hold things back, because we said, 'Well, how are we going to cover that?'

"We were an excellent performance group. That was always our focus, performance. We performed for a year and a half before we ever got close to the record thing. When we first started, we worked eight hours a day, six days a week, on our performance before we ever performed anywhere. So by the time we got to stage, we were pretty slick. We did skits and bits and stuff that nobody else really was doing. I think that's 'cause we came out of the folk thing, where we were more concert-oriented, rather than just playing a bunch of songs. We were not a dance band. We starved because we refused to do Top Forty, and refused to work the clubs. But in the long run, it paid off for us."

The album also gave the group a chance to demonstrate that it could indeed play competently on stage, despite its reliance on session players for much of its studio output. "It was a good group, instrumentally and vocally," adds Yester. "It's just that that was the deal back then. If you wanted to record, 'This is the producer, and you guys are using studio musicians period, take it or leave it.' And it wasn't that big of a deal to us. Because, you know, a lot of people were using studio musicians. And now it comes out that a lot of people that you thought weren't, were! Even the Beatles used people."

Some footage that has recently come to light on DVD has indeed demonstrated that the Association could handle their instrumentals with respectable skill onstage, playing "Along Comes Mary" on The Ed Sullivan Show without any evident assistance from backing tracks. They do the same tune on the bonus footage with the DVD version of the Monterey Pop documentary, though Yester says of their performance at that 1967 festival, "that was kind of a disappointing thing. We were used as the guinea pigs for that whole thing. They threw us on first to get the sound all set, get the lights and everything, and then they started the festival. They threw us to the lions!"

As for the performance captured on Live, Yester feels that "by and large, it was very representative of what was going on. One of the things I noticed years later in listening to it is, you can really hear the battle that's going on between two lead guitars. They're trying to top each other all the time, and some things, I wish one of them would have just comped." The high-altitude Utah air also created some problems, as Yester admits, "It's a little harder to sustain long notes and stuff like that because the air is so thin. But the audience was so incredible. The Mormon schools just loved us, and when [manager] Pat [Colecchio] talked to University of Utah and they responded so favorably, we couldn't resist. It was such a wonderful venue to do that. They just absolutely loved us. So we decided to give that a little more credence. And we had played up there in Utah so much that we were used to it. It wasn't something that caught us by surprise. We had a lot of oxygen in the dressing room. There was even oxygen on the side of the stage if anybody had any problem.

"But it was what it was, and I think by and large, we were all very pleased with it. I'm certainly very proud of it. I think a lot of people were surprised at that time, that we were as strong as we were instrumentally, just on our own. I know I was surprised! I went out to Wally Heider's truck out in back of the auditorium afterwards, and they threw up a rough mix, just brought up all the faders, and the first time they played anything back I went, 'My god! That's how we sound?' I was blown away."

While the 22-song set included all the expected hits, there were some surprises too, like the covers of Bob Dylan's "One Too Many Mornings" and the folk standard "Babe, I'm Gonna Leave You," which had been the Association's initial folk-rock singles in 1965; the non-LP 1970 45 "Just About the Same"; and the anti-war protest "Requiem for the Masses," which had been the B-side of "Never My Love." A particular highlight was their cover of Dino Valenti's "Let's Get Together," which had been a Top Five hit in 1969 by the Youngbloods, and recorded by numerous other acts in the '60s, including the Jefferson Airplane. "That was one of the first things we had ever done when we first started performing," notes Yester. "We had never recorded it, and always wished we had. We couldn't even remember the original vocal arrangement, which was just killer. But still, we wanted to have it on the album because we'd been doing it for so long. So we decided to include that, 'cause it was always part of our concert. It was a couple-hour-long concert, so we just decided, 'Okay, this is us, let's run it up the flagpole and see if anybody salutes.'"

At 74 minutes, the resulting double LP was quite long for a 1970 rock concert album, which might have scared away prospective casual buyers, as it peaked at a disappointing #79 in the charts. "It was very disappointing that it didn't do as well as we had anticipated, and I think that's probably why," speculates Yester. "It was just too much." The CD era, however, enables us to squeeze the entire hour and a quarter onto a single disc, catching the Association at their peak of their popularity as a touring attraction.
by Richie Unterberger 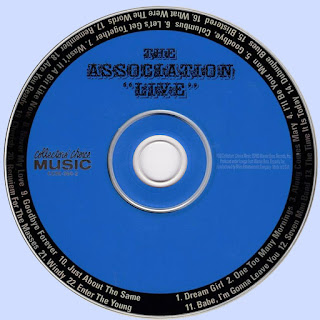 Free Text
Just Paste
Posted by Marios at 8:43 AM 3 comments: