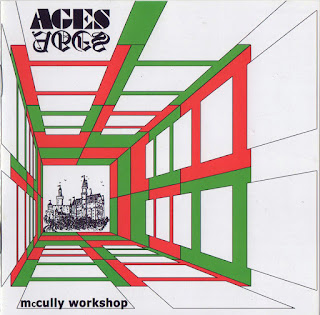 “'Ages' is a sort-of concept album”, remembers Mike McCully. In the early 70's, the promise made by the improvisational bands in the late 60's, like Cream, Iron Butterfly, The Jimi Hendrix Experience and many others, had started to bear fruit. It was a time of rock music becoming really heavy and progressive, but also a time of the Singer-Songwriters genre and Folk Rock. Medieval themes, Lord Of The Rings and 'Dungeons and Dragons' styles were the also the order of the day. Keyboard wizard Rick Wakeman had released an instrumental album about the 'Six Wives Of Henry VIII', Ritchie Blackmore's Rainbow had sang about 'The Man On The Silver Mountain' and Uriah Heep celebrated 'The Magician's Birthday'.Mike says that when McCully Workshop used to perform live around that time, the set list would include their arrangements of classical pieces like Bach's 'Toccata in D Minor', Grieg's 'Hall Of The Mountain King' and Strauss' 'Also Sprach Zarathustra' (better known as the theme to '2001: A Space Odyssey)' alongside 'Every Little Thing' by The Beatles and 'The Man From Afghanistan' by Curtiss Maldoon. Quite an eclectic mix.

When asked about his favourite song on the 'Ages' album, Mike McCully says without hesitation: 'I Walked Alone'. “This song had very difficult drumming, and I was influenced by Jim Keltner at the time. And the drumming on 'Guinevere' features double-tracked triplets”, continues Mike, “and live I used to play this with four sticks (a la John Bonham) for audio and visual effect.” The album opener, 'Avenue' is a bass-driven rock track, which echoes 'Salisbury'-era Uriah Heep, whilst 'Carbon Canyon' is an up tempo Steve Miller Band influenced blues boogie with rollicking piano and cool guitar licks from Richard Black (born 9th December 1946) who had been playing guitar with various bands since the mid-60s. He had been in a rock power trio, Elephant, with George Wolfaardt (Abstract Truth) and Savvy Grande (Suck) and he brought his impressive rock credentials into McCully Workshop as a replacement to Bruce Gordon. Black also brought his flute-playing skills to the 'Ages' album, and the flute adds an extra dimension to the Focus-inspired instrumental 'Shingles'.

'Step On Easy' is influenced by Country Folk Rock, and would not have been out of place on a Stealers Wheel album. 'Blues In C minor' was recorded live at the Students Union Hall at the University Of Cape Town. It is a tongue-in-cheek improvisational live blues jam with Tully trying out his best Louis Armstrong impersonation. “It was a spoof song”, says Tully, “I would make up different lyrics every time I sang it”. Leon Morton's organ-playing shines on this song.

Emerson, Lake and Palmer were a big influence on the recording sessions. Keyboardist Leon Morton loved Keith Emerson, Mike McCully rated Carl Palmer as a top drummer, and Tully McCully is a singing bassist, just like Greg Lake. Leon Morton used an Elka Rhapsody string synthesizer (also used by artists like Jean-Michel Jarre and Tangerine Dream) extensively on the 'Ages' album, and the epic chords on 'The Plague' are thanks to this instrument.

Richard Wilson's violin playing can be heard on a number of tracks on 'Ages' including a few of his own compositions. '1623' and 'Shingles' are among Tully's favourite songs on the album .'Great medieval sounds, mixed in with Irish jigs”, says Tully. “They were very much in the style of 70's prog-rock band East Of Eden`s surprise hit single,. 'Jig-A-Jig' ,we even used to play that song at our live performances”. Richard Wilson was also a classically-trained pianist and his playing can be heard prominently on 'Guinevere'. This song is a powerful prog-rock ballad that reached the LM Radio Top Ten. The vocal harmonies of Crocodile Harris can be heard on this track and it was performed live during the early days of South African TV.

McCully Workshop always prided themselves on their vocal harmonies, and were influenced by bands such as Crosby, Stills, Nash & Young, Yes, The Beach Boys, Uriah Heep, The Moody Blues and The Beatles. “We were always well-rehearsed with our vocal harmonies”, remembers Tully. 'Forgot How To Smile' was penned by Richard Black and Tully wanted to try something different with the vocals, so he put them through a guitar phase pedal! On the subject of strange effects, the echo chamber for this album was the 18 by 12 foot corrugated iron water tank on the roof of the studio building. “We put a speaker on one side, and two mikes on the opposite side to create echo and reverb effects” says Tully. “Then one day a storm came and blew the water tank across the road on top of the building next door!” Unperturbed they strung cables across and continued to use it.
by Brian Currin 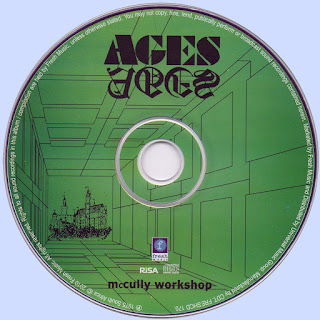 Free Text
the Free Text
Posted by Marios at 7:39 AM 1 comment: