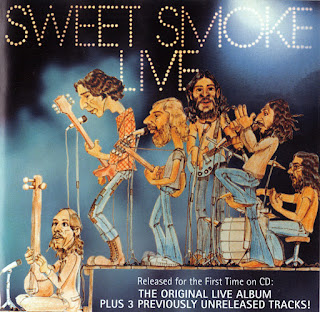 Sweet Smoke was an American music group living and playing in Europe from 1970 till 1974. Originally from N.Y. the group moved to Germany where they lived as a family commune. Within a year of their arrival they recorded their first L.P. Just a Poke which almost immediately turned them into a sort of cult icon of the underground scene which was beginning to emerge as Europe’s response to the American hippy scene.

An extremely resourceful and creative group, they took the art of spontaneous improvising to new heights, very often involving their audiences in their music. Words like rock jazz, acid rock, raga rock, hard rock, experimental music are only some of the words used to describe their music. Looking back one can see the early roots of fusion and new age music beginning to manifest through them.

Though the basic group consisted of 5 musicians, they came to most of their concerts with their communal family (10-15 of their friends) who helped them on and off stage to create an atmosphere of a musical happening

A Live that sounds like a studio record, with lots of rhythm and melodic changes, very well chained. First Jam, in the beginning lets the feeling of an improvisation, and you may ask yourself if the song was really written.

Guitar soli are really remarkable, with unbelievable texture and rich harmony. You may note that Kaminowitz seems really at ease during all the live. This First Jam gives 19 minutes of a great pleasure, with a magic feeling between the players.

Shadout Mapes is the second song of the disc. There again, you find lots of wealthy melodies, but as the track is shorter than the first one ("only" 11 minutes), there are less harmonies. You may notice that Kaminowitz and Greenberg play with a great commitment.

A strange solo concludes the song, that sounds again like an improvisation, and then plays the initial theme, flirting with blues and jazz. Ocean of Fears will expose you a different kind of music, more peaceful, in the style of From Darkness to Light, but Kaminowitz still dominates the music. Dershin reveals its essential presence during the play, and particularly during the soli. Very nice !

To Sweet Smoke music was not simply a collection of songs that the audience would sit back and listen to, but rather it was a living vehicle through which they could share with everyone their vision and joy of life. To sweet smoke music was magic, their concerts were an interaction between them and their audiences, and their group was like a Cosmic Space Ship forever exploring the unknown regions of our musical universe."
by Mike Paris 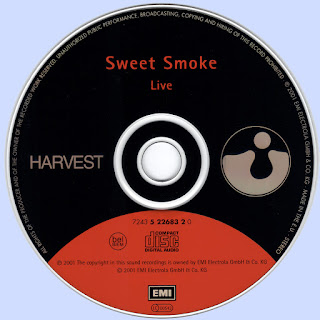 Free Text
the Free Text
Posted by Marios at 11:06 AM No comments: