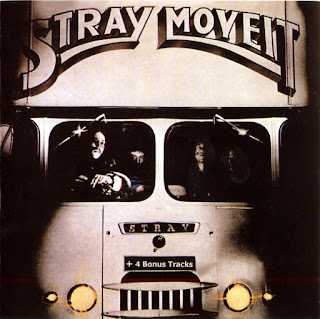 By 1974’s ‘Move It’ the band were on the verge of leaving Transatlantic and, for the first time, not only did they record a cover version but, they also made it the title of their album! Relocated at the managements suggestion to the States, ‘Move It’ was recorded in Connecticut, produced again by Wilf Pine from their management company. As Del Bromham is incredibly honest about in the superb booklet notes by Malcolm Dome, it was a mistake on the band’s part to switch management.
Opening with a drum solo called Tap (after all, this was 1974, and it was illegal for all prog and rock albums to be released without a drum solo) they then launch into Move It, which was completely Strayed up and has plenty of that guitar and power they well were known for. To be honest, it blows Cliff’s version out of the water.
The rest of the album, whilst being classic Stray, has always been regarded by the band as bit of a mish mash where they were trying too many different things. Tracks like Bromham’s rocking Hey Domino,their cover of Jimmie Helm’s Customs Man or Gadd’s Mystic Lady and Our Plea especially, moving the band into slightly softer and more melodic areas. This is the sound of a band searching for a new direction and not quite finding it, not a bad record at all, but certainly one which has plenty of alternative musical avenues to head down.
by James R. Turner 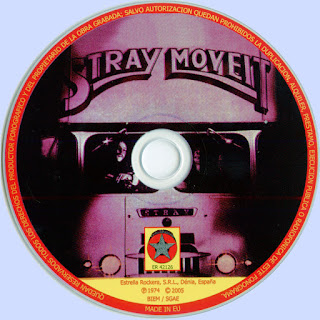