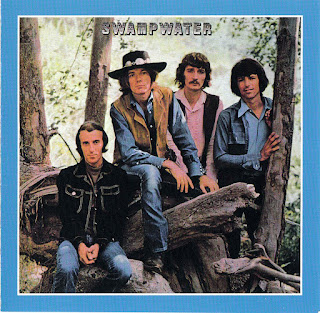 Swampwater’s 1970 debut stands alongside Sweetheart of the Rodeo, Guilded Palace of Sin, Poco’s debut, the Everly Brothers’ Roots and Bradley’s Barn as one of the best country-rock records ever.

Founder, Gib Guilbeau had a strong Bakersfield resume prior to forming Swampwater. Guilbeau and Gene Parsons had released a few early country-rock singles in the late 60’s as well as an album which eventually saw light of day in 1970 (although recorded in 1968-). The two recruited Clarence White in 1968 to record the legendary Nashville West album. This album has a good live feel and is highlighted by some of Clarence White’s best playing which was always breathtaking and revolutionary.

Eventually Swampwater formed and started out as Linda Ronstadt’s backing group in the late 60’s. Eric White, Clarence’s brother was also in the band and prior to forming Swampwater had been in the excellent Kentucky Colonels. Swampwater made two distinct albums in the early 70’s without Linda Ronstadt’s involvement. The above album was different than many notable country rock acts of the time for adding cajun and swamprock elements. The album opens and closes with two certified country-rock classics, Louisiana Woman and Big Bayou. Guilbeau had recorded the classy Louisiana Woman with both Nashville West and on his 1970 album with Parsons, though the version heard on Swampwater is the best. Big Bayou is a hard rocking, white hot country song with pretty fiddle that has been covered by many popular artists inlcuding Rod Stewart. Other songs like the acoustic flavored Man From New Orleans are highlighted by beautiful harmonies and a tear in your beer ambience.

Swampwater’s musicianship is high caliber and Guilbeau’s lyrics are always first-rate and thoughtful. Great songs like Kathleen, Desperation’s Back Again (supposedly an Everly Brothers homage with great down and out lyrics) and River People are beautifully arranged and display superior craftsmanship. It’s really a wall of greatness, with each song just as good as the next.

Swampwater mastered all the rural styles from cajun to folk-rock but just never received the breaks they so justly deserved. Their members were slugging it out in bars playing this sort of music years before anyone else had thought to do so. This album is a masterpiece and recommended to any true country fan.
by Jason Nardelli 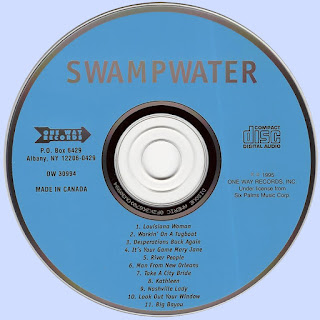 Free Text
the Free Text
Posted by Marios at 9:46 AM 2 comments: