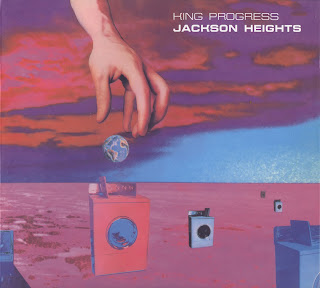 When Keith Emerson disbanded The Nice, Lee Jackson decided to hang up his bass guitar and go back to 'simpler' music. With this in mind he gathered together some musicians he had known for a number of years: Charlie Harcourt, Tommy Sloane and Mario Tapia. The result being the first Jackson Heights album King Progress, on which Jackson sang and played acoustic guitar.

The standout tracks are 'Mr Screw' and a reworking of the old Nice song 'The Cry of Eugene'. It did not sell in any great numbers. The band started to drift apart and Jackson's next recruitment began. Joining him were John McBurnie and Brian Chatton, both multi-instrumentalists. He did not, however, recruit a drummer.

The band was now a trio with Jackson playing bass, sounds familiar! McBurnie took over the majority of the writing with all three sharing the vocals and a second Album The Fifth Avenue Bus, was recorded with Mike Giles on drums. At this stage the band was touring as a trio, without a drummer. There are no outstanding tracks on the album and once again there was a lack of commercial success.

Undaunted, writing and recording of the next album, with Brian Chatton now contributing to the song writing, began. The resulting album Ragamuffins Fool, was easily their best so far. There was almost a hit single with 'Maureen' and the overall sound was of a band confident in what they were doing. Again most of the drumming was done by Mike Giles. They toured, again without a drummer, and recorded their only Radio One Session in support of the album. It what was becoming inevitable it did not sell.

By now Lee Jackson was getting a bit downhearted and poorer, he was using his own money to keep the band solvent. The master plan was the dreaded 'Concept Album'. The theme was to be about the lives of the 'ladies' who worked in Burlesque theatre. It didn't quite work out that way but, armed with two drummers, Mike Giles and Ian Wallace, and a 20 piece orchestra they went into the studio and recorded Bump 'n' Grind. The publicity machine went into overdrive and the actual record was presented in a deluxe laminated sleeve. Even the record company wanted this one to be big! Guess what? that's right - it bombed.

A major problem in touring with the album was reproducing the orchestral sound. Jackson approached Patrick Moraz, Swiss keyboard wizard with a view to him touring with the band. He declined but suggested Jackson might consider forming a band with him. Moraz had the record deal and other finances in place. In view of his own 'money problems' Jackson agreed and with Moraz and ex Nice drummer Brian 'Blinkey' Davison formed Refugee.
by Jim Sutherland 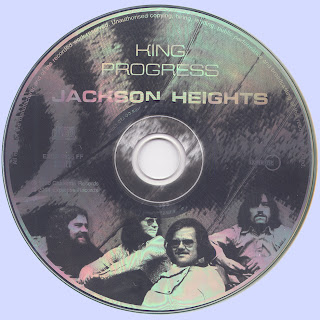 Free Text
Just Paste
Posted by Marios at 10:01 AM 5 comments: