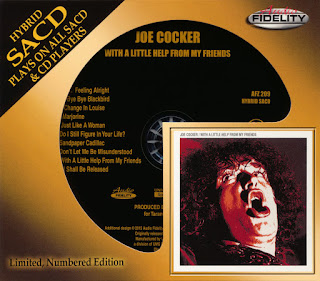 In April 1969, Joe Cocker laid the groundwork for his ’70s stardom when he unveiled his debut album, With a Little Help From My Friends. For almost a decade, the Sheffield-born Cocker had been toiling in the trenches — first under the pseudonym Vance Arnold and later under his own name, fronting cult pub legends the Grease Band. In an era of self-contained bands and singer-songwriters, With a Little Help From My Friends bucked the trend in establishing Cocker as one of the most imaginative and distinctive interpretative singers of his generation.

The album opens with funky piano chords ushering in Dave Mason’s Traffic song “Feelin’ Alright,” the first of many tracks that Cocker made his own with help from backup singers Merry Clayton (who also sang on the Stones‘ ‘Gimme Shelter’) and Brenda and Patrice Holloway. Around the same time, he also debuted his singular stage mannerisms, which he later genially spoofed alongside John Belushi on Saturday Night Live.

The album’s highlights showcase Cocker’s formidable vocal and emotional range, including a bluesy reading of the 1926 pop standard “Bye Bye Blackbird”; Bob Dylan’s “Just Like a Woman,” lovingly approached like a church hymn; and a sultry arrangement of “Don’t Let Me Be Misunderstood” that flipped the Animals’ famously angst-ridden version on its head. Cocker even threw some playful falsettos into “Marjorine,” one of two songs he co-wrote with pianist and fellow Grease Band alum Chris Stainton.

And then there’s the title track, a rare reinvention of a Beatles song that’s better than the the original. Cocker takes the lovely but rather staid Ringo Starr-sung cut and radically transformed it into a master class of soulful tension and release, punctuated by stinging guitars played by Jimmy Page. The following year, Cocker performed one of the most memorable sets at Woodstock, skyrocketing his fame and setting him up for an even more fruitful decade to come.
by Eduardo Rivadavia April 24, 2015 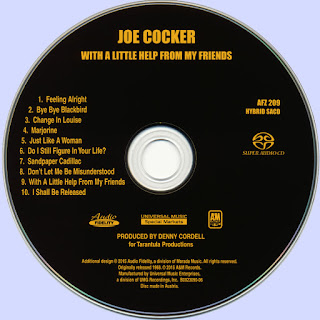