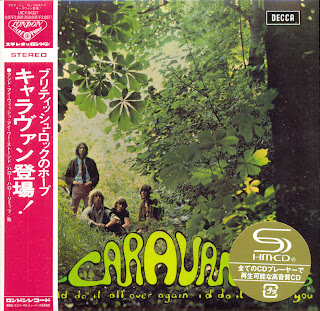 'If I Could Do It All Over Again, I'd Do It All Over You' was Caravan's second album. Their self-titled first LP, for Verve (home of Bird, Ella and the Velvets, natch) had held some promise, but was underproduced and underpowered: some great songs ('Place Of My Own', 'Love Song With Flute') and a lot of filler*.

A move to Decca two years later brought a much more assured and distinctive sound, however. Indeed, this record perfectly bridges that awkward gap between psych and prog, being every bit as much of a muso-fest as their more illustrious (and dull) Melody Maker poll winning rivals could boast, but - and it's a big but - full of good, old fashioned, acid-fuelled SONGS WITH TUNES. And what tunes. I wanna elect Pye Hastings as the great lost English songsmith of our time. But I digress.

The title track starts proceedings. And a catchier little ditty is impossible to find. One of those songs where one hearing alone lodges itself into your brain for life. I bet there are people out there who may have heard that 'Who - do - you - think you are - do - you - think you are' refrain on Top Gear or similar back in 1970, have never heard it since, and could sing it from memory even now.

It's got a well-weird time signature a la the grossest excesses of Messrs Emerson and Greenslade (and a keyboard solo likewise) but, like the best Canterbury tunes, you can't fail to move to it. In an ideal world this would have knocked Mungo Jerry and the sodding Archies into the remainder bins straight away, and would be a perennial feelgood oldie 45. It was a single, by the way. It sold, by my conservative estimate, two copies.

Then things move up...nah, they rocket ten miles high. 'And I Wish I Were Stoned' is a cracking example of the aforementioned songwriting genius. On first impressions, a simple, repeating upward verse (sung in the rustic tenor of Richard Sinclair) with a corresponding decending chorus (sung in the charmingly strained alto of the mighty Pye), it follows the first song in avoiding 4/4 altogether, not so's you'd notice though. Okay, this one might take TWO hearings this time, but then I'd defy you to not be singing it the next morning.

The only thing that might stop you is the fact that the segued 'Don't Worry' that follows is THE MOST WONDERFUL TUNE EVER WRITTEN IN THE HISTORY OF MANKIND. Well, since Schubert's Rosamunde Overture anyway. There is no justice in this world that this perfect song hasn't been covered a hundred times since and earned its composers a fortune. Just hear it, please. The two tracks together constitute the best eight minutes of psych-tinged rock that my stylus has ever ploughed.

After such an early peak, things have to go downhill, but not far. A phased, stereo-panned drum sequence leads into the deadly slow 'As I Feel I Die' where "everything's going a slight shade of purple" and the downers take hold. Not for long though. Another fatally catchy (and blatantly jazz-based) riff forms the basis of the remainder of the song, and, as on every track before and after, Dave Sinclair takes over with an organ solo that tells Ray Manzarek the news.

And the side ends with the 'With An Ear To The Ground You Can Make It' sequence, another blisteringly tuneful epic with the best keyboard sequence of the whole album three minutes in. The slower, flute-accompanied reprise of the main tune is pure delight, before the piece ends with what sounds like Rick Wright falling asleep at Keith Jarrett's Koln Concert.

Side Two starts with two short, nice-but-inessential tracks in 'Hello Hello' and 'Asforteri', the former being the better of the two and Richard Sinclair's only real vocal spotlight on the album (he was to have a much greater showcase on the excellent 'In The Land Of Grey And Pink' album twelve months later). But his name is immortalised on the longest and most famous (in Caravan and Canterbury terms, you understand) track on the record that comes next. 'For Richard' starts slowly, quietly, and menacingly, not a million miles away from the Floyd's 'Careful With That Axe, Eugene' epic on 'Ummagumma', but with another otherwise tender, melodic vocal with flute obligato.

Then, like 'Eugene', the intensity slowly increases, until, 3'40" in, comes...THE RIFF. And here, more than at any point on the record, Caravan rocks. The track palls a little as the solos progress (and god, do they progress) but comes to life again in the guitar-driven coda that emerges after ten minutes or so. The album ends with the pointless half-song that is 'Limits'. Never mind.

The 14 minutes that comprise 'For Richard' have become the staple of every Caravan live set to this day, but that track is a muso-fest only as far as I'm concerned. The real meat and two veg of Caravan's second album is the almost faultless sequence of SONGS that comprise Side One, essential listening for anyone with an interest in the latter days of sixties drugrock.
by Fitter Stoke 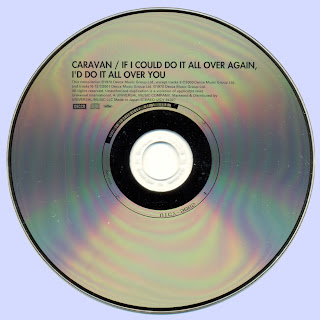