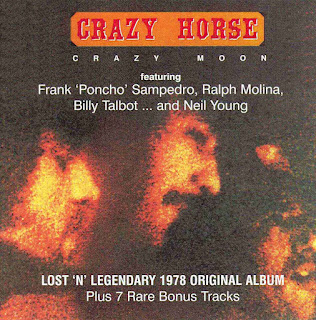 Six years went by between the release of Crazy Horse's third album, At Crooked Lake, and its fourth, Crazy Moon, and a lot of water went under the bridge in the meantime. Crazy Horse was, in effect, three different bands on its first three albums because the only constants were bassist Billy Talbot and drummer Ralph Molina as lead singers, songwriters, guitarists, and keyboardists came and went. The band name seemed to be retired by 1973, but in 1974 Talbot and Molina hooked up with singer/guitarist Frank Sampedro as Crazy Horse, leading to sessions with their erstwhile employer Neil Young that resulted in the Young/Crazy Horse album Zuma. At the same time, they recorded some Crazy Horse tracks that sat around for years, finally being finished off in the summer of 1978 for release here.
The result is the first album since their debut, 1971's Crazy Horse, that sounds identifiable as the band that backs Young. In part, that's because Young himself is present on guitar on the tracks "She's Hot," "Going Down Again," "New Orleans," "Downhill," and "Thunder and Lighting," and brings along his production associates David Briggs and Tim Mulligan as well as his pedal steel player Ben Keith. But it's also because this is a well-realized effort on which Sampedro proves to be the first of the many successors to original guitarist Danny Whitten to fit in well with Molina and Talbot; because Molina and Talbot have upped their participation beyond providing the rhythm and some vocals, contributing to the songwriting as well; and because the guest musicians include a bevy of Crazy Horse alumni and friends including keyboardist Barry Goldberg (producer of the pre-Crazy Horse band the Rockets); Greg Leroy (Crazy Horse guitarist, 1971-1972); Bobby Notkoff (Rockets violinist); and Michael Curtis (Crazy Horse keyboardist, 1972). This is something of a Crazy Horse reunion effort, and it shows the band off at its best, or at least probably as good as it could be without co-founder Whitten, who died in 1972.
by William Ruhlmann 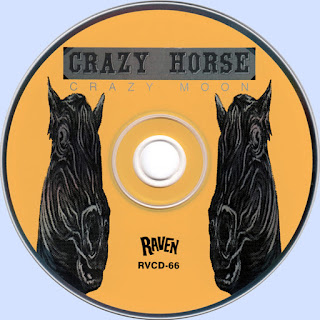 Free Text
Just Paste
Posted by Marios at 9:02 AM No comments: