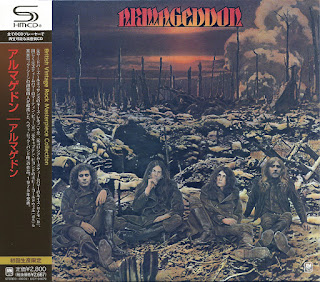 Cynics who perceive many super-groups as nothing more than bloated extrapolations of, at times, perfectly mundane musical components, can back up their assumptions with Armageddon's eponymous debut from 1975. The first and final spawn of the would-be-super-group featuring former Yardbird vocalist Keith Relf, erstwhile Captain Beyond drummer Bobby Caldwell, ex-Steamhammer guitarist Martin Pugh, and Relf's Renaissance partner, bassist Louis Cennamo, the album contains a meager five tracks -- four of which extend beyond the eight-minute barrier due to bouts of arguably unnecessary, self-indulgent waffling. On the other hand, this was the '70s, people, and of course this sort of excess was par for the course, back then. What's more, these same dubious qualities actually contributed to the album's eventual adoption as a precursor to the stoner rock movement by dope fiends everywhere, most of whom rarely heard a lengthy jam session they couldn't nod approvingly to.
Whatever one's opinion, the quartet's admirable pedigree unquestionably yielded some inspired songwriting, and even memorable improvisational moments within driving opener "Buzzard," the gently whimsical post-psych ballad "Silver Tightrope," and the 11-minute, prog rock smorgasbord of "Basking in the White of the Midnight Sun" (boasting four subtitled movements). Like the LP's sole conventionally sized offering, the Pugh-dominated "Paths and Planes and Future Gains," as well as its bluesiest, loosest jam, "Last Stand Before" (where Relf finally whips out his famous harmonica), these songs all fall significantly short of their obvious objective, Led Zeppelin, but fare quite nicely in comparison to more down-to-earth contemporaries like Budgie, Hawkwind, or the interconnected Captain Beyond.
Upon release, Armageddon was met with wildly polarized love/hate critical reviews and actually skimmed the lower reaches of the American charts; but very infrequent live shows and Relf's shocking death by accidental electrocution the following year put an end to the band's hopes. A few half-assed reunions took place in years to come but, thankfully, none proved serious enough to yield any Relf-less Armageddon recordings, thus guaranteeing the enduring cult status of this far from perfect, but intriguing and understandably one-of-a-kind LP.
by Eduardo Rivadavia 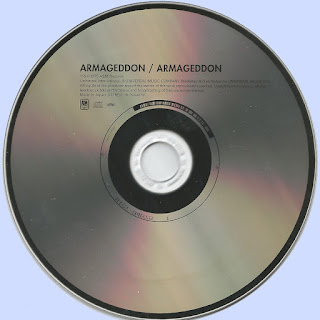 Free Text
Just Paste
Posted by Marios at 4:56 AM No comments: