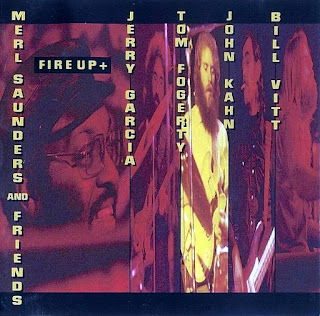 There are many solid moments on this release, though, none better than the lovely blues inspired riffs that Garcia lays out on "Lonely Avenue." I generally prefer the cover versions to the original Merl compositions. John Lennon's song "Imagine" is done instrumentally. The rendition of J. J. Cale's "After Midnight" is top notch. This song was an outstanding outlet for long jamming at Merl and Jerry's live performances.

Merl Saunders Fire Up Plus is a more than worthwhile addition to a CD collection.
by Barry Small

This reissue set combines the two early Merl Saunders albums on Fantasy, Fire Up and Heavy Turbulence. The content of these original albums is almost there in its entirety and nothing new and previously unreleased is added to the stash. "Chock-Lite Puddin'" is the single missing pearl, representing quite a severe mistake in editing, as this was not a marble for playing with. A better tune to experience the fall of the axe would have been one of several covers with a faded '70s presence that is a bit like day-old cigarette smoke. "The Night They Drove Old Dixie Down" could have been left out, please, that or "After Midnight," although the latter number was an FM airplay hit at the time of its initial release. To be fair, the vocal work of Saunders on the former number is actually formidable, as are his interesting organ variations on the theme.

Listeners may associate the collective jams of Saunders in various ensembles with Grateful Dead guitarist Jerry Garcia as friendly but loose-knit music created casually, the tempo sometimes the most casual aspect of all. Yet these early albums were much more like a real band than the efforts of some ensembles who actually call themselves bands -- it is a lot tighter than a Grateful Dead record, for example. The players involved actually represented a coming together of musical forces that was every bit as significant as Crosby, Stills, Nash & Young. In fact, the merging of the Grateful Dead and Creedence Clearwater Revival with a seasoned jazz and rhythm & blues organist had great musical implications that are fulfilled, from time to time, on the best moments of these sessions, such as the truly thrilling extended jam "Manchild." For Garcia, simply playing alongside a rhythm guitarist who could keep time must have been something of a revelation.

Much of the time the players don't try to change the world while keeping the beat, settling into enjoyably funky music designed by Saunders and clearly expressing his gestalt: "My Problems Got Problems" is the opening complaint, "Soul Roach" the eventual cure. Garcia fans can be proud of their man here, as his playing is sharp and detailed, obviously inspired by the input from his keyboard buddy.
by Eugene Chadbourne 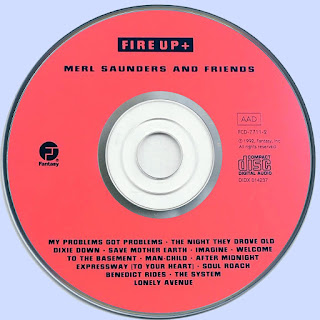