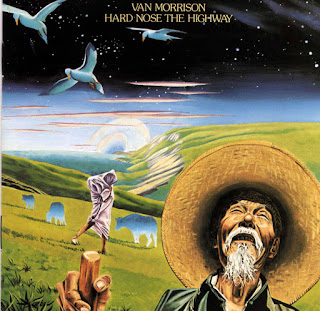 Hard Nose the Highway is psychologically complex, musically somewhat uneven and lyrically excellent. Its surface pleasures are a little less than those of St. Dominic's Preview and a great deal less than those of Tupelo Honey, while its lyric depths are richer and more accessible than those of either predecessor. The major theme of Hard Nose is nostalgia, briefly but firmly counter-pointed by disillusion. The latter sentiment Van spews out in the album's one ugly, self-indulgent song, "The Great Deception," a vicious indictment of hip urban culture and rock affluence.

The chief musical mode of Hard Nose the Highway is intimate, quiet jazz, a cornucopia of understated, subtly-shaded and shifting instrumental textures that provide a sympathetic setting for Van's vocal ruminations. Again, Van demonstrates his ability to fuse jazz, pop and rock ideas into a fluid format whose stylistic identity ends up being his and his alone.

The cut-by-cut schematization of Hard Nose is fairly loose. Side one comprises five songs, beginning with "Snow in San Anselmo" and closing with "The Great Deception." "Snow" is alternately contemplative and rapturous in its recollection of a near-miraculous occurrence. A languid, jazz-flavored verse suddenly erupts into a sped-up refrain that pits the Oakland Symphony Chamber Chorus against a frenetic horn-sax arrangement. Van's introduction of a large chorus seems as unnecessary as the London Symphony Orchestra behind Neil Young, for it exaggerates the volatile emotional dualism that exists at the core of Van's sensibility in the same way that the London Symphony overdramatizes and undercuts Neil's pathos. "Snow" does contain, however, one of Van's best vocals.

Next is the ingratiatingly melodic "Warm Love," which embodies in all its details a sensuous appreciation of life and music. Because it's the album's strongest tune, it stands the best chance of being a hit single. The title cut, which follows, is an abbreviated, inferior reprise of "St. Dominic's Preview" in its sound, structure and shifting time sense. Here Van pays tribute to the best mid-Fifties pop ("Ain't that some interpretation/When Sinatra sings against Nelson Riddle strings"), then assesses his own rocky past and offers a somewhat cynical directive: "Put your money where your mouth is ... In order to win you must be prepared to lose sometime."

"Wild Children," which delves deeply into Van's personal mythology from childhood through adolescence, is the album's most historically resonant song. Against early memories of returning soldiers, Van identifies his growing-up with the figures of Tennessee Williams, Rod Steiger, Marlon Brando and James Dean. The musical energy here is relaxed, the poetry terse and poignant: "We were the War Children/Born 1945/When all the soldiers came marching home/Love looks in their eye."

As was the case in St. Dominic's Preview, the second side of the album turns out to be better than the first. The ten-minute "Autumn Song" demonstrates anew Van's gift at creating extended meditations that accumulate emotional power as they unfold in modified, impressionistic streams of consciousness. "Little glamour sun coming round/Take a walk when autumn comes to town," he sings, evoking as few contemporary composers have, the ineffable joys of daily life in attunement to a pleasant environment. The music is laid-back and sparkling, highlighted by the lovely pianism of Jef Labes and the doubled guitars of Van and John Platania.

"Autumn Song" is sandwiched between two other mellow delights. Joe Raposo's "Green" is an enchanting bit of poetic whimsy set in rock & roll triplets and featuring a lusty horn break that segues into shivering strings. The album closes with Van's beautiful arrangement of the traditional "Purple Heather," which he has transformed into an ethereal "Astral Weeks" reverie that fades out on his inimitable rock scat singing ... "Da da da, Da da da, Da da da ..." echoed between voice and piano, with glissando strings hovering overhead. It is a deliciously satisfying ending that carries us back into the mystic arena where Van always seems most at home.
by Stephen Holden, September 27, 1973 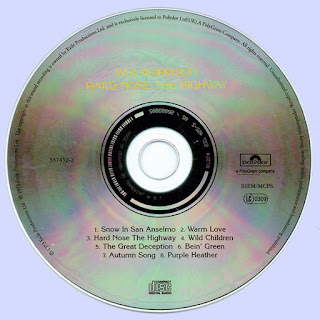 Free Text
Text Host
Posted by Marios at 5:31 AM 4 comments: