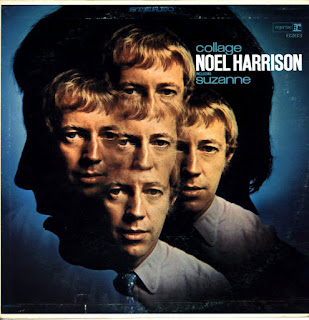 The son of actor Rex Harrison, Noel Harrison was born In 1934. As a teenager he joined the Ipswich repertory theatre group and taught himself guitar, but his main interest was sport and most of his spare time was spent skiing in Switzerland.

At an early age he was a member of the British ski team, becoming its first giant-slalom champion in 1953 and representing Britain at the Winter Olympics in Oslo in 1952 and  Italy in 1956, competing in both down-hill and slalom events.
Noel also did his National Service and, after leaving the army in the fifties, toyed with the idea of becoming a journalist, but instead he concentrated on his guitar.
When he was 20, he started playing professionally, around the tables in a Greek restaurant in London, for meals and tips.

He also made a living playing in bars and nightclubs all over Europe, including appearances at the famous Blue Angel Club, where one show was recorded for a live album.

But his early break came in 1958 when he took a regular part in the BBC TV programme Tonight, as part of a team who sang the day's news in a calypso style.

He left England for America in 1965, working as a nightclub entertainer at such venues as San Francisco's Hungry I and at the Persian Room in New York

Thanks to his managers Bob Chartoff and lrwin Winkler, who went on to produce the Rocky films, he had a record hit the charts, A Young Girl, written by Charles Aznavour. The song was included on his first studio album, Noel Harrison, which was released in 1966.

Subtitled “Noel Harrison Sings Songs of Today and Tomorrow” it includes a number of Noel’s best tracks, including his wonderful cover of Leonard Cohen's Suzanne as well as the beautiful People in the Rain and Woman.

His version of the Beatles classic, Strawberry Fields Forever, is also pretty good as is the unusually titled Mrs Williams' Rose.

In their review on October 28, 1967, Billboard magazine said: "Featuring his current single Suzanne, Noel Harrison has a good chart package in this 12-cut album, which also includes his single Mrs William’s Rose. Several recent hits are given unusual treatment, such as Procol Harum’s A Whiter Shade of Pale, which gets a distinct dance beat."

On October 19, 2013, Noel played a gig in the village of Black Dog in Devon. Following a long drive home he had a heart attack and was taken to hospital. Sadly, he died in hospital on Sunday, October 20, aged 79. On Tuesday, October 29, Noel was buried in a woodland close to his home in Devon. 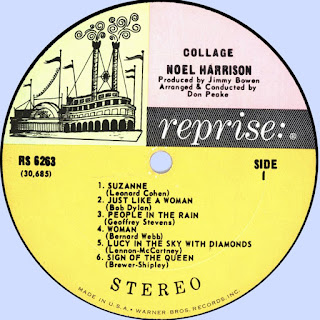 Free Text
Text Host
Posted by Marios at 8:19 AM 1 comment: