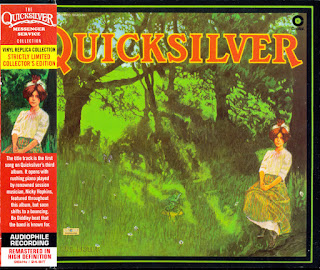 Nicky Hopkins climbs on board as a full-fledged band member, and Quicksilver Messenger Service go in an unpredictable direction. Then again, how unpredictable is it, really? Many a-hippie band at the time heard The Band do marvels with roots-rock and decided to go the same way (see the Grateful Dead for example number one, and all those Airplane offshoots too); Quicksilver Messenger Service, however, were different in that they decided to rely on Hopkins' impeccable keyboard skills to lead them in this direction, and this makes up for a truly unique listen.

First and foremost let me tell you that 'Edward (The Mad Shirt Grinder)', the nine-minute instrumental "jam" that ends this record, isn't just the best tune on it. It might, for all I know, simply be the most accomplished, emotional, technically immaculate, resplendent instrumental composition to ever come out of the entire California rock movement of the Sixties. It's essentially "jazz", I guess, but the kind of jazz that prefers real intensity and melodicity to pretentious senseless noodling, with beautiful, yet powerful keyboards and sensitive, moody guitars all over the place.

In fact, the interplay between Hopkins' piano, Cipollina's guitars, and those tricky little organ patterns that can be heard in the background if you're attentive (more Hopkins overdubs?) is simply stunning, and any art-rock lover who'd want to dismiss the Frisco scene offhand would have no choice but to seriously reevaluate his position after hearing this track. Yeah, I suppose that the slow middle part of the number can get a little tedious at times, but it's essentially needed for contrast with the fast part - the one that really gets the blood flowing, with Hopkins unleashing all those unbelievable piano riffs upon us. Of course, the track is hardly typical for the Frisco scene: it's credited to Hopkins, and it's Hopkins that makes all the difference, and with all respect to Nicky, he's a very alien element to the SF/LA spirit of the times. But it takes some real gall and adventurousness for a bunch of stoned-out hippie-guitar playing kids to get Britain's most required piano session man to join and provide them with his ideas, doesn't it?

In any case, Hopkins plays a crucial role on the other eight songs as well - much too often, his inspired playing is able to bring even the weakest material to life. I wouldn't want to say, though, that the album is awash in weaker material: Happy Trails it's not. In fact, it's all pleasant and endearing as hell, if hell can ever be endearing, that is. Starting from the album cover, dammit. Isn't that album cover simply beautiful? That velvet green, mmm... And the carriage with the horse on the back sleeve, too, don't forget 'bout the horse. I love green. The songs are... well, the songs are kinda green, too, in that they're a) relaxative, b) inspired, c) very raw, sometimes to better, sometimes to worse effect. Seems like Nicky was the most hard-workin' guy at the sessions, and I don't blame him.

A lot of those numbers are essentially R'n'B pastiches, rambling, introspective numbers that take a long time to develop and sometimes don't develop at all. Like Freiberg's 'Too Far', for instance, which sounds - don't laugh - exactly like all those early Mott The Hoople introspective tunes with Ian Hunter doodling away at the piano and mumbling something exceedingly clever and vaguely self-pitying. Hunter, however, simply can't touch Hopkins, which means that throughout most of the songs I pay little attention to lyrics or vocals and mostly just enjoy the magnificent organ swirls and piano tinkles. 'Holy Moly' is even better - a swirling R'n'B anthem replete with celeste, harpsichord and God knows what else, Nicky really revels in his multi-instrumentalism and virtuosity. And then the song quickens up the pace and the guitars go frenetic and it's a marvelous rave-up in the best tradition of British blues-rock bands. Like Ten Years After.

Other highlights include the title track, that starts with a majestic pseudo-classical keyboard intro and then incorporates an oddly arranged Diddley beat where the lead singer sounds like a particularly revved-up Eric Burdon; Cipollina's generic, but extra-weird in its "muddy" production blues number '3 Or 4 Feet From Home', complete with dog noises in the beginning (impersonated by Nicky, if we are to believe the liner notes); and the medievally-influenced 'Joseph's Coat', with somber backing chorale vocals and more of those catchy piano riffs. In other words, creativity abounds: you may like or dislike the record, but you'll have to admit that SF bands were rarely that inventive, either before or after this album. And I blame it on Nicky - there's no way the band could have made such a giant step up from Happy Trails without his participation.
by George Starostin 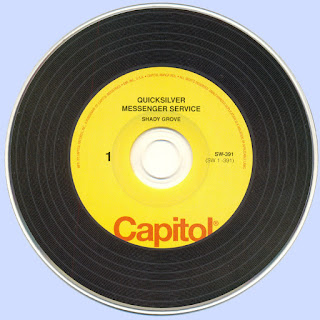