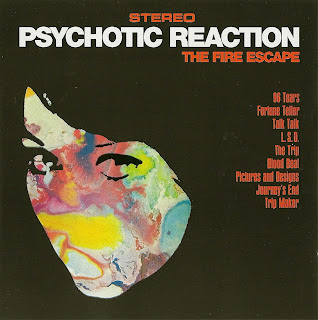 A totally bewildering 60's album from San Francisco recorded by session musicians and put together by the legendary Kim Fowley and Michael Lloyd (October Country, W.C.P.A.E.B., Smoke). The album comprises "far out" cover versions of various artists including, "? & The Mysterians", "Music Machine", "Count Five", "The Seeds" and more. A totally mind-blowing psychedelic garage compilation by this mysterious group who have never revealed themselves although it's always been rumoured to have involved Sky Saxon & Mars Bonfire. A nugget from the colourful 60's.

San Francisco, a far-out city; The Fire Escape, a far-out group; a natural for each other. This group was the creation of a certain Michael Lloyd and the notorious Kim Fowley who put together a collection of musicians to record a far out record for far out times.

From the age of twelve Michael Lloyd lived and breathed music. Sometime during his tenure with various teenage pop bands, Lloyd crossed paths with the colourful producer, Kim Fowley. Fowley was smitten with the precocious youngster and at the tender age of thirteen, Lloyd inked a publishing deal for his songs with Fowley. Shortly after Fowley introduced him to the entertainment mogul and future California lieutenant governor Mike Curb with the hopes that Curb would use some of Lloyd's songs in his films. Instead, Curb handed the young musician the production reins for a couple of his projects which appeared on Lloyd’s Tower imprint and its Sidewalk label division (the Rubber Band albums were early examples).

Fire Escape is just one of the albums that Lloyd, in his capacity as an arranger, worked on with Fowley in the early days. For further evidence of the man’s talents on the psychedelic front, check out the 1968 Sidewalk album The Smoke on which Michael, as well as singing, playing keyboards, guitar, bass and horn, added the string arrangements as well. Other projects included The West Coast Pop Art Experimental Band, the Wild In The Streets soundtrack and October Country, to name but a few.

To say Michael Lloyd was simply a producer is an understatement. He was a Vice President of MGM Records by the age of 20 and was to spend more than 35 years producing hit records and soundtracks, garnering more than 100 gold and platinum records for his efforts. Some of the international artists he's worked with include The Moody Blues, Lou Rawls, Barry Manilow, Dionne Warwick, The Monkees, Sammy Davis Jr., The Righteous Brothers, Pat Boone, Air Supply and Frank Sinatra.

Kim Fowley also gained quite a reputation for spotting bands and then offering his services as their producer and the list of his discoveries is longer than anyone could remain awake to read. It was Kim who gave Rodney Bingenheimer, whose house was the refuge for wasted musicians and budding guitar heroes in the mid-‘60s, the title "Mayor of Sunset Strip." He also had a knack for producing hit novelty singles, giving the world such musical oddities as Napoleon XIV's They're Coming To Take Me Away, and more importantly, certainly within the context of this, writing the first rock song about LSD (The Trip).

Psychotic Reaction was the only release by the Fire Escape for GNP-Crescendo (home of the Seeds and Orphan Egg) and comprised of covers of the "far out" hits of the day by the likes of the Count Five's Psychotic Reaction (which GNP-Crescendo spelt wrong on the back of the sleeve!), Kim Fowley's The Trip which opens with the classic line "Summer's here kiddies/It's time to take a trip", Sean Bonniwell's Music Machines' Talk Talk, The Seeds Tripmaker and more. It's rumoured that Sky Saxon, Mars Bonfire (of Steppenwolf fame) and Kim Fowley played and sang on the album, although none of this was ever proven. But whatever the facts, like so many acts from this creative period, it was over before the record was released.

This nugget of an album was produced by Hank Levine and Larry Goldberg who worked with other credible late ‘60s psyche outfits such as The Flying Circus as well as one of other Hollywood mystery groups of the time, The Mesmerizing Eye.
The Rare-Music 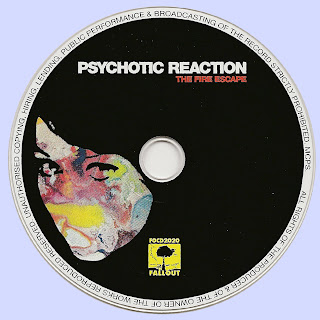