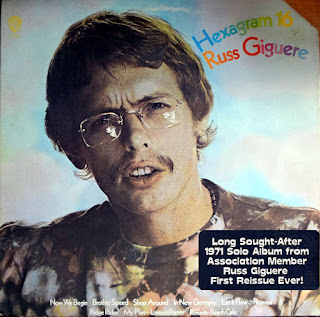 In 1971, rhythm guitarist/vocalist/songwriter Russ Giguere departed the band’s ranks to pursue a solo career.  He teamed that year with the producer of The Association, John Boylan, to craft his Warner Bros. solo debut Hexagram 16.  With support from musicians including Jim Keltner, Russ Kunkel, Spooner Oldham, The Dillards’ Herb Pedersen, steel guitarist Buddy Emmons and The Flying Burrito Brothers’ Chris Ethridge, Hexagram was released to little fanfare.  It’s just made its CD debut from Real Gone Music. Real Gone’s CD, produced by the label’s Gordon Anderson, has no remastering credits, but shouldn’t disappoint.
“Now we begin, we’re reaching out to you/Now we begin, doing the thing that we do,” Giguere’s familiar voice intones over some gentle strums on “Now We Begin,” the first track on Hexagram 16.  Though an accomplished songwriter, he only wrote two songs on the album, turning over the balance of the tracks to writers including producer Boylan, Randy Newman, Judee Sill, Bill Martin, Association bandmate Jules Alexander, and even Smokey Robinson for a cover of “Shop Around.”  The solo voice introduced on “Now We Begin” momentarily jars, hearing Giguere’s plaintive instrument sans the billowy blend of Association harmonies.  But the acoustic folk-pop sound is just one of the many solo styles explored by the artist on Hexagram 16.
Future Eagle Bernie Leadon played guitar, along with Giguere, on “Begin.”  He also supplied the heavier licks on Boylan’s folk-rocking “Brother Speed,” first recorded by Boylan and his brother Terence the song in 1968 as Appletree Theater.  Judee Sill, one of the most original voices to emerge from the Laurel Canyon rock scene, accompanies Giguere on her own mini-western vignette “Ridge Rider.”  (Sill’s own rendition can be heard on her 1971 eponymous debut album.)  Jim Spheeris’ “Let It Flow” is a truly lovely, almost Byrds-ian track, in an even more explicitly country vein.
Sill and Leadon weren’t the only well-known guest musicians.  For Bill Martin’s impressionistic “My Plan,” Giguere enlisted Wrecking Crew vet Larry Knechtel (of Bread and “Bridge Over Troubled Water” fame) to play gothic organ, while The Association’s onetime producer Jerry Yester, his wife Judy Henske, and keyboardist Craig Doerge of The Section on the track’s ethereal, high harmonies.  Martin also supplied the considerably more relaxed “Rosarita Beach Café.”  The starriest track on Hexagram is a tough and funky remake of “Shop Around,” with Leadon, pianist Spooner Oldham and R&B legend Bobby Womack (also on guitar) joining Giguere, Merry Clayton, Clydie King and Venetta Fields on the soulful vocals.
Giguere affected an exaggerated voice for the rock-and-roll of his song “In New Germany,” but more naturally rocked on Randy Newman’s 12 Songs track “Lover’s Prayer.”  With Oldham doing his best boogie and Clayton leading Fields and King on the backups, it’s one of the best tracks on the LP.  As with so many rock covers of Newman tunes – think Tom Jones or Joe Cocker – Giguere’s version plays it straight on the lyrics that came off as dryly funny when sung by their composer in character: “Don’t send me no young girl to love me, With their eyes shinin’ bright/All the young girls are afraid of me, Send me a woman tonight…”
Hexagram 16 concludes with Jules Alexander’s “Pegasus,” orchestrated by Al Capps in Wagnerian style.  It ends the eclectic album on an offbeat and grandiose note, and indeed, perhaps Hexagram 16 was too diverse for its own good.  In the liner notes penned by Richie Unterberger, Giguere confesses, “It’s pretty hard to bag it, pretty hard to put it in a category.  Because it’s just music for music’s sake.”  True though that may be, it’s a more-than-worthwhile reissue for any fans of The Association eager to hear one of the group’s finest vocalists out front exploring his many facets and influences.
by Joe Marchese, August 7, 2013 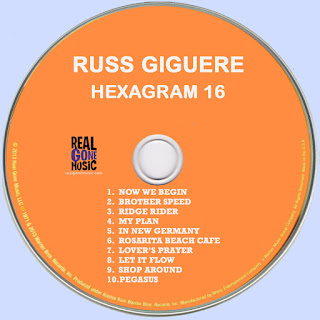 Free Text
Just Paste
Posted by Marios at 6:23 AM 2 comments: