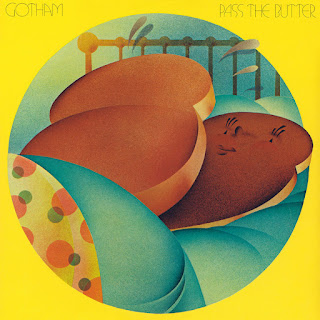 Gotham was an American brass-rock/soul band from NYC that released the album Pass the Butter on Motown-subsidiary Natural Resources in 1972.
Gotham, alternately known as the New York Street Band, came together in 1971 when veteran saxophonists Alfred “Peewee” Ellis and Frank Vicari teamed with trumpeters John Catchell and John Eckert, both fresh off a stint with Ten Wheel Drive.
Ellis did a five year (1965–69) stint in the James Brown Revue, where he co-wrote hits like “Cold Sweat,” “The Chicken,” and “Say It Loud – I’m Black and I’m Proud.” During 1970/71, he played on albums by soul singer Bobby Lester, jazz saxist Hank Crawford, and Bahamian musician Exuma.
Vicari spent the prior decade backing big band leader Maynard Ferguson, followed by a stint with Woody Herman and His Swinging Herd. In 1970, he partook in the jazz-psych one-off The Albert. He then played on the 1971 Kudo release From a Whisper to a Scream by soul singer Esther Phillips. As Gotham got underway, he played on the 1972 albums Beer Cans On the Moon by folkster Ed Sanders and the eponymous jazz-rock double-album by White Elephant, produced by Mike Mainieri.
Gatchell played on the 1970 UA release Spectrum by jazz drummer Les DeMerle. With Eckert, Gatchell played on the 1970/71 albums Brief Replies by brass-rockers Ten Wheel Drive and the eponymous fourth album by singer/songwriter Cris Williamson. They both played alongside Vicari on the 1971 Esther Phillips release (Gatchell also played on her 1972 album Alone Again, Naturally). Meanwhile, Gatchell and Ellis locked horns on the 1971 Kama Sutra release Do Wah Nanny by Exuma.
Eckert played on 1969 jazz titles by Paul Desmond and the American Brass Quintet, the latter culminating a five-year stint. He also notched credits on 1970/71 albums by PJ Colt and Carol Hall. In parallel with Gotham, he played on the 1972 Flying Dutchman release Blues and the Soulful Truth by jazz singer Leon Thomas.
The other members of Gotham were guitarist Link Chamberlin, bassist Chris Qualles, drummer James Strassburg, and singer/guitarist Schuylar “Sky” Ford. Chamberlin was a member of ’60s surf rockers The Orchids. More recently, he played on albums by Giant, The Rascals, and the Ernie Wilkins Orchestra. Strassburg hailed from brass-rockers Gas Mask, which issued one album, Their First Album, on Tonsil Records in 1970. The others were relative newcomers to the scene.
Gotham signed to Natural Resources, a sublabel of Motown, and recorded their singular album at MoWest Studios in Los Angeles. The album, Pass the Butter, hit shelves in 1972. It features 11 songs: two written by Ellis (“Use It or Lose It,” “Moon”) and six by Chamberlin, including “Why Doesn’t the Sun Shine,” “Ease My Mind,” and “Talkin’ ‘Bout.” Ford contributed “They Made Me An Outlaw.” They also tackle numbers by Otis Smith (“Sittin’ On a Mountain”) and Billy Vera (“Behind the Wall”).
Pass the Butter was produced by Tom Wilson (The Animals, The Velvet Underground, Mothers of Invention) and engineered by MoWest newcomer Larry Miles, who worked on concurrent label projects by Diana Ross and the Four Seasons. The cover features an illustration by Tim Clark of Rod Dyer, Inc. It shows an encircled image with ambiguous subject matter: apparently two sentient slices of toast, in the shape of hearts, swiving and sweating in a vintage bed. The back shows a photo collage of the eight members with diagonal credit text. In the Netherlands, Pass the Butter was issued on Motown’s Rare Earth division.
Gatchell and Eckert played on the 1973 Paramount Records release by Joel Kaye and His New York Neophonic Orchestra. That same year, Gatchell rejoined Ten Wheel Drive for their eponymous fourth album, released on Capitol. He also played on 1973–75 albums by George Benson, Ronnie Foster, Esther Phillips, John Tropea, and Eumir Deodato.
In 1975, Gatchell interacted once more with Ellis on the Roulette release Out Among ‘Em by Love Childs Afro Cuban Blues Band, produced by Michael Zager. Gatchell then played on 1976 albums by Chick Corea (The Leprechaun) and singer/songwriter David Forman. During said timeframe, Eckert played on albums by Johnny Hammond, Michael Mantler, and different titles by Deodato.
Vicari played on 1973–75 albums by Ferguson, T-Bone Walker, Blue Mitchell, John Lennon, the Manhattan Transfer, and ex-Mountain man Leslie West. In 1976, he played on the Muse Records release Slow Down, Baby, the singular album by soul-funk singer and songwriter Rickie Boger.
Ellis played on mid-’70s titles by Sonny Stitt and Reuben Wilson. As Pee Wee Ellis, he released the jazz-funk album Home In the Country on Savoy Records in 1977. He spent many subsequent years as a musical director for Van Morrison.
Strassburg played on High On You, the 1975 debut solo album by Sly Stone. Behind Ellis, he drummed alongside Idris Muhammad and Bernard Purdie on Home In the Country. In 1983, Strassburg played on the jazz-pop album So Nobody Else Can Hear by Jimmy Cobb with Freddie Hubbard and Gregory Hines.
Chamberlin, as Linc Chamberland, cut a 1977 solo album, A Place Within, on Muse. In 1983, Chamberland collaborated with NW contrabassist David Friesen on the Muse release Yet to Come.
Ellis, Strassburg, and Chamberland all played on the 1977 A&M/Horizon album Light’n Up, Please! by reedist David Liebman.
Gotham’s manager, Marty Perellis, became a road manager for Frank Zappa during the mid-1970s. He’s depicted on the cover of the Mother’s 1973 release Over-nite Sensation.
Jazz-Rock'n'Soul 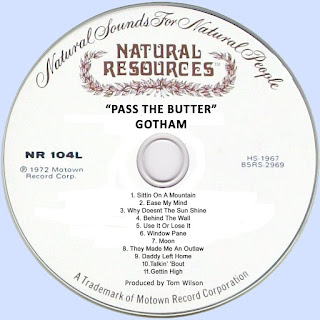