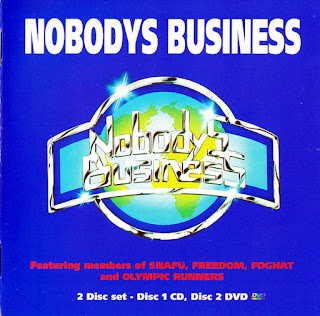 In the sleeve notes of Angel Air's reissue of Nobody's Business' sole, self-titled album, Tony Stevens explains that the group formed in response to "the need for a new and original rock band that could really play." The year was 1977, and he couldn't have been more wrong. The last thing the world, least of all Britain, needed was a new conglomerate of old rockers touting a warmed-over mixture of classic blues-splashed rock and funk. Outside the U.K. it might have been different, for the band certainly had the pedigree to excite attention.

Bassist Stevens had been a stalwart of both Savoy Brown and Foghat, while lead vocalist/percussionist Bobby Harrison was a founding member of Procol Harum, Freedom, and Snafu. The American members' pasts were less illustrious, but still intriguing. Guitarist Joe "Jammer" Wright began his career as a roadie in the '60s for some of rock's greatest legends, before moving into session work. Drummer Jerry Frank, brought in to replace original Business man Reg Isadore, had spanned the musical spectrum, from soul band the Babysitters to country-popper Gary Smith.

The sleeve notes explain in detail how it all went wrong, with the album receiving only a Japanese release. But if Nobody's Business' timing was off back then, it may be nigh on perfect now. The set is tight, the music exciting, and the band's hybrid style is all the fashion at the moment. The moody, blues-laced "Losing You" and haunting "Unsettled Dust" should work a treat with the neo-proggers, the storming "Cut in Two" and stomping "Bleed Me Dry" equally so with the hard rockers, and "Living Up to Love" and "Doing the Best I Can" should appeal to the urban-funk crowds. "Looks Like I'm in Love" will boogie it big time in the frat houses, while the title track should easily cross over, much like Humble Pie did long ago. If an edited cut of that isn't the first choice for airplay, then the driving "Highway," one of a trio of bonus tracks, is the obvious choice.
by Jo-Ann Greene 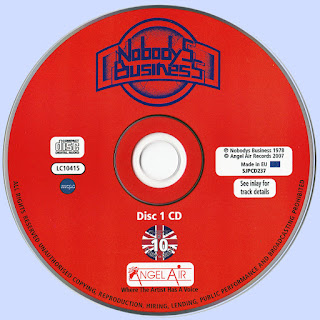 Free Text
the Free Text
Posted by Marios at 11:11 AM 2 comments: